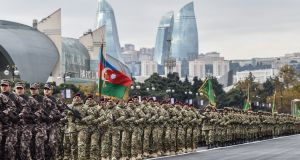 Azerbaijani soldiers during a military parade dedicated to the victory in the Nagorno-Karabakh armed conflict, in Baku, Azerbaijan. Photograph: EPA

Azerbaijan has held a triumphal military parade to celebrate its victory in recent fighting over the disputed region of Nagorno-Karabakh, as protesters in neighbouring Armenia denounced their government over the country’s bitter defeat.

Turkish president Recep Tayyip Erdogan was guest of honour in Baku, the Azeri capital, in recognition of Ankara’s support for Azerbaijan during six weeks of clashes that claimed more than 5,000 lives before a Russian-brokered peace deal took effect on November 10th.

The agreement cemented Azerbaijan’s battlefield gains and returned much of Nagorno-Karabakh and surrounding districts to Baku’s control, more than 25 years after the region was seized by its ethnic Armenian majority.

The recent fighting ended with jubilation in Azerbaijan and Turkey – which has dramatically increased its influence in a region long dominated by Russia – but sparked a political crisis in Armenia, where prime minister Nikol Pashinyan has faced street protests, calls to resign and an alleged assassination plot.

“In the course of the 44-day war, Azerbaijan put an end to the occupation of its territories and restored justice,” Azeri president Ilham Aliyev declared during a parade that featured marching soldiers, armoured vehicles, a flypast by helicopters and fighter jets and a display of captured Armenian military hardware.

“We saw the political situation in the world and saw how international law did not work . . . A military solution to the conflict became inevitable,” the autocratic leader added. “Today, the whole world sees that Karabakh is Azerbaijan. Long live the Turkey-Azerbaijan friendship!”

‘A day of victory’

Turkey sold powerful military drones to energy-rich Baku, stationed fighter jets at an Azeri airfield to ward off outside intervention in the conflict, and fully backed Azerbaijan’s assertion of its right to use force to reclaim Nagorno-Karabakh, even as Russia and western powers called repeatedly for an immediate ceasefire.

“Today is a day of victory and pride for the whole Turkic world,” Mr Erdogan said. “As Turkey, we have taken the ‘two states, one nation’ motto . . . as a guide in our relations with Azerbaijan.”

In the Armenian capital Yerevan, meanwhile, police arrested more than 40 protesters as a crowd denounced Mr Pashinyan as a “traitor” and tried to force its way into government headquarters.

He has refused to resign and accuses political opponents of acting at the behest of former Armenian leaders whose corruption and mismanagement made the nation’s military vulnerable to defeat.

Amnesty International on Thursday accused Azerbaijani and Armenian forces of committing war crimes, citing footage “showing the decapitation of captives and the desecration of the corpses of opposing forces”.

“Both Azerbaijani and Armenian authorities must immediately conduct independent, impartial investigations and identify all those responsible.”