Without border controls EU ‘will be totally destabilised’ by crisis, says French PM 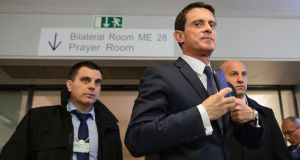 French prime minister Manuel Valls in Davos: “If Europe can’t protect its own borders, it’s the very idea of Europe that could be thrown into doubt. It could disappear, of course – the European project, not Europe itself.” Photograph: Fabrice Coffrini/AFP/Getty Images

The future of the European Union is being put in “grave danger” by the continuing migration crisis, France’s prime minister said on Friday.

Manuel Valls said Europe could not continue to take all the refugees fleeing the “terrible wars” in Iraq or Syria and that without control of its external borders, the EU’s “societies will be totally destabilised”.

“It could disappear, of course – the European project, not Europe itself, not our values, but the concept we have of Europe, that the founding fathers had of Europe.

“Yes, that is in very grave danger,” he said. “That’s why you need border guards, border controls on the external borders of the European Union.”

Mr Valls called for EU solidarity with Germany in the migration crisis, but criticised chancellor Angela Merkel for compounding the situation last year.

He praised Dr Merkel’s “courage” and “values” in the crisis and said Germany needed to be helped, but added: “A message that says ‘come, you will be welcome’ provokes major shifts of population.

“If you say anything in Europe today,” he added, “a few seconds later it is on the smartphones of people in refugee camps near Libya.”

As the European migration crisis dominated discussions in Davos, EU foreign policy chief Federica Mogherini warned member states they could not go on demanding that the EU address the migration crisis while pushing national strategies.

“In which direction, we can only guess,” he said. “It is also premature to know how long it will take to transform this challenge into an opportunity.”

“The numbers that we are taking in in Europe cannot go on,” he told Bloomberg News. “It’s becoming disruptive – at local level we cannot manage it.”

EU countries have begun reintroducing border checks in a bid to control migrants entering their territory. This has put pressure on the EU’s prized passport-free Schengen zone, which allows for the free movement of people and trade.

Earlier this week, Austria said it would cap asylum applications for the next three years, the latest national effort to tackle the crisis, following border controls imposed by Germany, Sweden and Denmark.