EU finally waking up to ‘hybrid’ threat from resurgent Russia

From fake news to hacking, Baltic states are familiar with all facets of Kremlin pressure 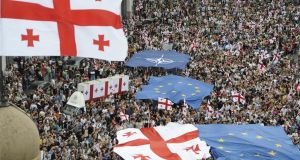 Georgian people hold national, EU and Nato flags at a rally against Russia in Tbilisi in September 2008. “Russia’s war against Georgia in 2008 should have been the wake-up call – but to some extent the West pressed the snooze button and went back to sleep,” says Estonia’s foreign minister, Sven Mikser. File photograph: Irakli Gedenidze/AP

A casual reader of certain websites could conclude that the recent arrival of Nato reinforcements in the Baltic states has been a fiasco of brutality and incompetence.

In Lithuania, so the websites claimed, a US B-52 warplane accidentally dropped a bomb on a block of flats, German soldiers raped a local girl and their commanding officer was outed as a Russian agent.

In Latvia, meanwhile, US troops were reportedly poisoned by mustard gas, Nato forces were given free rein to wander the country with loaded guns, and the alliance started recruiting local Russian-speakers for war games that could test the effects of new biological weapons.

All the stories started life on Russian or pro-Russian websites, except for one that hackers placed on the website of a major Baltic news agency – and all are false, examples of the fake news that is among a spectrum of measures that Moscow uses to undermine adversaries and boost allies around the world.

The US is now investigating Russia’s role in last year’s presidential election and its possible ties to Donald Trump; new French leader Emmanuel Macron has denounced Kremlin-run media as “agents of influence which on several occasions spread fake news about me personally and my campaign”; and Germany is on alert for a Russian disinformation blizzard ahead of September’s federal elections.

None of this is a surprise to Estonia, Latvia or Lithuania. Since regaining independence from Moscow in 1991, the Baltic states have withstood Russian pressure in fields ranging from espionage to energy supplies to cyber security, and can offer invaluable advice to the rest of Europe on how to handle a hostile Kremlin.

“To most of our European colleagues I would say ‘Welcome to the club’,” Latvian foreign minister Edgars Rinkevics told The Irish Times in Riga.

“A few years ago, when we were talking about the need to tackle Russian propaganda, most EU ministers said our concerns were exaggerated,” he recalls. “That has changed dramatically in the last year and now it’s a totally different story... I’m delighted to see that the understanding of hybrid threats is increasing in all [EU] capitals.”

From fake news to hacking, the Russian “active measures” that now vex western leaders and security services have been used against the Baltic states for many years.

It is a decade since Estonia suffered the world’s first cyber attack against an entire country, when the websites of its government, banks and media outlets were crashed during a row with Russia over the fate of a Soviet war memorial.

Even when [Russian president Vladimir] Putin said he detests western-style democracy, he continued to be treated as if aspiring to democracy

The Baltic states’ intelligence agencies have always closely monitored the activity of Moscow’s agents of influence in the political, business, media and security worlds, and are swift to expel suspect Russian diplomats - showing much less patience for dubious Kremlin activity than many other EU states.

“There has been a naive approach to Russia,” says Sven Mikser, the foreign minister of current EU presidency-holder Estonia.

“Even when [Russian president Vladimir] Putin said he detests western-style democracy, he continued to be treated as if aspiring to democracy. Recent [Russian] attempts to interfere in democratic processes in major western countries have had a sobering effect,” he said in an interview in the Estonian capital, Tallinn.

“When Russia launched a military operation against Ukraine and annexed Crimea [in 2014], everyone said it was a wake-up call. In fact, Russia’s war against Georgia in 2008 should have been the wake-up call – but to some extent the West pressed the snooze button and went back to sleep.”

Moscow’s actions in Ukraine - where it stands behind separatist forces in a war that has killed 10,000 people - have hardened the West’s stance, prompting Nato to deploy multinational battalions to the three Baltic states and Poland. They are nevertheless vastly outnumbered by Kremlin troops in western Russia.

“I think Putin is a calculating player and can be deterred,” Mikser says. “If he is sure that any provocation will be met with an immediate, decisive response, then he won’t try his luck.”

Information confrontation, as Russia would call it, is going to be one of the future trends

Moscow’s “hybrid” tactics cannot be countered solely with troops or the kind of fence that Lithuania is building on its border with the Russian exclave of Kaliningrad, however, and the Baltic states are in the vanguard of Europe’s multi-faceted response.

Tallinn is home to a Nato centre of excellence for cyber defence, and Riga hosts an equivalent centre for strategic communications, which focuses on how to win the battle of ideas and messages with adversaries ranging from Russia to so-called Islamic State. The EU also now has its own East StratCom Task Force, which was established in 2015 to counter Russian disinformation campaigns.

“Information confrontation, as Russia would call it, is going to be one of the future trends,” says Janis Sarts, director of the Nato centre of excellence in Riga.

The aim of hybrid aggression, he explained, “is to achieve your goal without crossing the threshold into full military conflict ...That’s why there is a strong information and influence component - it’s less costly and you can always say ‘We didn’t do it’.”

Mikser believes the real aim of the Kremlin’s hybrid strategy goes well beyond helping certain candidates or parties to take power in particular western states. “I think Russia has the more abstract and much broader goal of creating confusion in our societies, and discrediting democratic governments and our structures, institutions and elections,” he says.

The EU might be getting wise to Russian hacking and fake news, but it is probably impossible to fully protect Europe’s cyber systems from attack or shield its citizens from the potentially divisive and demoralising drip-drip of disinformation.

And even if Europe has identified the source and nature of the danger, can it build robust defences without damaging the same freedoms it is trying to protect?

“It’s very difficult to impose restrictions in an electronic environment ... I think it’s always possible to get access [to banned websites] and prohibition can make them more interesting,” Sarts warns.

“And you will never beat propaganda with propaganda, but you will undermine the system you are trying to guard... One of Russia’s targets is the value system of the West, and we must be careful not to undermine ourselves.”