Italy says it is bearing the brunt of continuing crisis after receiving 85,000 migrants this year 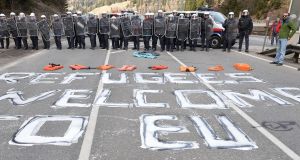 “Refugees welcome to EU” is painted on a street in thevillage of Brenner on the Italian-Austrian border in April 2016. Austria’s defence minister said his country will deploy armoured vehicles at the key Alpine pass to stop migrants arriving from Italy. Photograph: Kerstin Joensso/AP Photo

Austria is planning to impose border controls and possibly deploy troops to cut the number of migrants crossing from Italy, defence officials said, drawing a protest from Rome and reigniting a row over Europe’s handling of the refugee crisis.

Tensions between European Union countries over how to share the burden of migrants flared in 2015 when hundreds of thousands, many fleeing wars in Africa and the Middle East, began arriving in EU territory, mainly via Greece, and headed for Germany, Austria and other nearby affluent states.

Austria took in more than one per cent of its population in asylum seekers at the time, which helped increase popular support for the far-right Freedom Party. Keen to avoid another influx, it said it would introduce controls at the busy Brenner Pass border crossing with Italy if one materialised there.

That has not yet happened but Italy recently asked other EU countries to help it cope with a surge in migrants reaching its southern Mediterranean shores from Africa, raising concern in Austria that many will soon show up at its border with Italy.

That is a political hot potato in Austria, where a parliamentary election is scheduled in October with immigration shaping up as a central issue.

Austrian defence minister Hans Peter Doskozil told the mass-circulation Kronen Zeitung in an interview published on Tuesday that he expected restrictions would be introduced along the Alpine boundary with Italy “very soon”.

A ministry spokesman said the controls would include the Brenner Pass and that four armoured vehicles had already been deployed to the area to block roads, with 750 troops poised to be brought in within 72 hours to deal with emergencies.

“These are not battle tanks. These are armoured vehicles without weapons which could block roads. These were already used during the refugee crisis of 2015/16 at the Spielfeld border crossing [with Slovenia],” he said.

Italy’s foreign ministry said it had summoned the Austrian ambassador “following the Austrian government’s statement about deploying troops” – a rare rebuke to a fellow EU member.

Marco Minniti, Italy’s interior minister, said he was “frankly surprised” by Mr Doskozil’s comments as there was no emergency at the Brenner Pass border crossing. “This is an unjustified and unprecedented initiative which, if not immediately corrected, will inevitably create repercussions on security co-operation” between the neighbouring countries,” he said in a statement.

Austria co-ordinated with nearby Balkan countries last year to effectively close what was then the main route into Europe for migrants. The move drew complaints at the time that it was undermining the EU’s principle of free movement, though Vienna says it did what it had to do to safeguard its borders.

Italy, alongside other states on the bloc’s fringes, has complained it is now bearing the brunt and the cost of the migrant crisis. It said last year that any plans to introduce controls at the Brenner Pass, a major road and rail link between northern and southern Europe, would break EU law.

Mr Doskozil said the EU was not doing enough to stem the migrant flow. “The situation should stir all of us into action,” he told ORF radio. If the EU does not manage to jointly find solutions, he added, “national measures will be necessary”.

Mr Doskozil’s spokesman said there was no concrete timetable for the new controls on the Italian border. “But we see how the situation in Italy is becoming more acute and we have to be prepared to avoid a situation comparable to summer 2015.”

Italy has taken in more than 85,000 refugees and migrants so far this year, most of whom arrived by boat from Africa, making it the main point of entry into Europe.

France, Germany and the EU executive pledged more support for Italy on Monday, but made no direct reference to a plea from Rome for other countries to allow migrant-rescue boats to dock in their ports.

Controls at the Brenner Pass would be particularly sensitive as the frontier there separates two regions that feel closely connected – Austria’s Tyrol and Italy’s South Tyrol. South Tyrol was once part of the wider Austro-Hungarian empire but was annexed by Italy at the end of World War One in 1918.