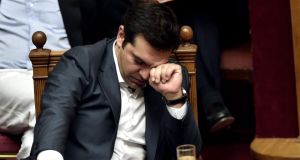 Syriza came to power on the slogan “Hope is on the way”, but hope has proved to be insufficient in putting Greece’s case to the international community. Greece questioned the authenticity of that community, but is still subject to its dominance. Alexis Tsipras was arrogant enough, in his naivety, to think he could refashion European attitudes to peripheral countries; all he got in return was a humiliating kick in the proverbials.

Was Syriza an experiment that failed because its leaders were “good men” but too innocent and inexperienced? Is that the fate of ideology in a consensual society? Tsipras and Syriza won a Pyrrhic victory in the referendum battle, but the war was already lost, because he himself lost the plot. Once it was clear he couldn’t fulfil his election promises (renegotiating, or preferably rescinding, the bailout), he should have called elections and taken his punishment. The referendum, in this respect, was a cop-out.

We wait, yet again, for the cataclysm that is always forecast but never comes. Like the man with the placard announcing “The world will end at midday”. The Angelus tolls for all but him. Kindly onlookers smile and say “Come back tomorrow”.

It is Tsipras’s and Syriza’s tragedy that their vision and energy were dissipated by the force majeure of Europe. They shone the light. Germany, Finland, Slovakia and Ireland were among the glimmermen who extinguished it.

Tsipras has become an enigma: a childlike man, bewildered by a situation he has mistakenly created, amazed his good intentions could not convince hard-bitten politicians to soften their attitude towards his truly beleaguered people. Where he expected to be welcomed and respected, he was scorned.

One Greek newspaper asked “Are we living on a different planet to the rest of Europe?” For many, the answer is “Yes”.

The referendum did not answer the crucial question: Are we, or are we not, Europeans? This question has been at the core of the Greek state since its foundation. The Balkans were always a problem zone, and you can’t turn a problem into a euro. Today, Russia, Turkey, Cyprus, Bulgaria and Macedonia are as central to the problem as they were in the 19th century, with China added to the equation. Greece is between a rock and a hard place, geopolitically.

Modern or traditional? Forward- or backward-looking? West or east? And the answer is: both and neither. The Greek word “dilemma” means “two different propositions”. But Greece is in fact caught on the horns of a trilemma: how to be both and neither and yet remain Greece. Europe does not care about this: it’s payback time, full stop.

The persistent problem imperilling a new bailout is that the EU has previously accepted Athens’s promises that reforms will be implemented, only to discover they were not. Both sides know most of the reform plans are incapable of realisation. To eradicate the deeply-embedded intransigence of the Greek public service cannot be achieved overnight.

That, however, does not excuse the hectoring from the European centre. On the day of the referendum, Nobel laureate Paul Krugman called the bullying and intimidation of Greece “a truly vile campaign”.

And senior economists worldwide have accused Angela Merkel of unjustifiably and vindictively adding increased pain to the austerity programme, which all (including Merkel herself, as we now know from WikiLeaks) admit to have been ill-conceived.

Never have so many vital elements in Greek history and character been clustered on the head of a single crisis. The man with the placard will be back tomorrow. Same time, same place. Fail better. Richard Pine’s new book, Greece Through Irish Eyes, will be published in October by Liffey Press.

1 Further restrictions to be considered in Dublin and elsewhere as Covid-19 cases rise
2 Dublin farmer discovers overnight rave on his land
3 Restaurants’ role in Covid-19 transmission came as surprise to many
4 Coronavirus: 188 new cases and no further deaths amid concern over eight counties
5 Gardaí used spit hoods on at least 14 people with mental illness
Real news has value SUBSCRIBE