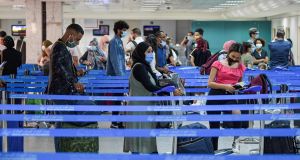 European Union member states have edged towards agreeing a list of countries around the world that will be declared safe for travel in a bid to ease border restrictions imposed due to the coronavirus pandemic.

EU ambassadors negotiated through the weekend to try to reach consensus on which countries should be on the list, which is not expected to include the United States due to its surge in Covid-19 cases.

According to a draft list, the list of countries from which travel is to be considered safe are: Algeria, Australia, Canada, Georgia, Japan, Montenegro, Morocco, New Zealand, Rwanda, Serbia, South Korea, Thailand, Tunisia and Uruguay.

China may also be included, as long as Beijing agrees that EU citizens will also be allowed to travel there in turn.

The decision is based on levels of Coronavirus infections, how close the country’s ties are to the EU, and whether the border opening would be reciprocal.

The agreement does not apply to Ireland because it is not in the Schengen area of free travel, and has a Common Travel Area with Britain. The Schengen countries closed their borders to most travel from outside of the zone on March 17, but Ireland kept its borders open while requiring arrivals to quarantine.

EU member states ultimately have the power to make their own decisions over their borders, but are keen to reach consensus to avoid a repeat of the uncoordinated cascade of border closures that occurred as the pandemic took hold in March.

The final list is expected be announced on Tuesday, just in time for its scheduled implementation on Wednesday July 1, according to Spanish foreign minister Arancha González Laya.

“This is not an exercise to be nice or unfriendly to other countries, this is an exercise of self-responsibility,” the minister told Spanish media.

The EU member states had initially been due to announce a final list earlier, but were held up by contention over the criteria for choosing countries.

The countries deemed safe are considered to have rates of Coronavirus infections that are equal to or below the EU average, but there has been disagreement over whether national figures can be reliably compared due to different ways of collecting the data.

The list is expected to be reviewed every two weeks, and countries could be removed from the safe list if their epidemiological situation changes.

The European Commission has recommended that member states also open their borders to incoming international students and highly skilled non-EU workers regardless of which country they are travelling from, as well as to non-EU nationals who are legally residing in the EU and their family members.