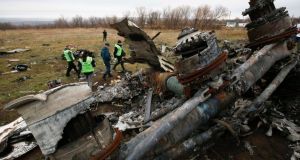 The European Union agreed to add new names to its sanction list at a meeting of EU foreign ministers in Brussels yesterday but stopped short of imposing fresh economic sanctions against Russia amid continued divisions among member states on the issue.

Foreign ministers agreed that separatists from the eastern region of Ukraine will be targeted with asset freezes and travel bans as the EU continues its trade stand-off with Russia over its actions in Ukraine. Officials have been tasked with drawing up a fresh list of individuals to be targeted, with the names expected to be announced by the end of this month. To date the EU has imposed asset freezes and travel banks on 119 Ukrainian and Russian individuals.

The moves emerged as Russia confirmed it had expelled a number of Polish diplomats from Moscow in what it said was retaliation for similar moves by Warsaw.

Sanctions under review Speaking after the meeting,

Minister for Foreign Affairs Charlie Flanagan said the decision to impose more sanctions but refrain from further sectoral sanctions against Russia, would be kept under review.

He said the decision taken yesterday was “a fine example” of the EU reaching consensus following a robust exchange of views. The EU is deeply divided about how best to respond to the ongoing tensions in Ukraine, which began almost a year ago when the former Ukrainian government pulled out of a planned association agreement with the bloc.

Yesterday morning’s two-hour scheduled discussion on Ukraine overran by more than an hour following interventions by a number of foreign ministers in the debate. The three Baltic states reiterated their demands for stronger language from the EU against Russia, which has denied sending troops across the border into eastern Ukraine. Last week Nato called on Russia to withdraw its troops from Ukraine after reporting sightings of Russian equipment and troops entering Ukrainian territory.

Strategic approach Since assuming the role of EU foreign policy chief on November 1st, Ms Mogherini has advocated a more strategic approach to the ongoing crisis in Ukraine. “Sanctions in themselves are not an objective,” she said before

yesterday’s meeting, adding that other strategies had to be pursued by the EU, such as encouraging Ukraine to implement reforms and engaging Russia in dialogue. Officials denied this represented a “softening” of approach on Russia, and said it indicated an awareness that a longer-term strategic approach to Russia was needed as the EU approached the anniversary of the Vilnius summit.

After the meeting, Ms Mogherini said it was vital the Ukrainian government committed to reforms to guarantee EU financial support and assistance, pledging to visit Kiev once the new government was formed.

In a joint statement after the meeting the ministers called on all “illegal and foreign forces” to withdraw from Ukraine, without mentioning Russia.

It added that the elections in the so-called &#8220;People&#8217;s Republics&#8221; of Donetsk and Luhansk on November 2nd were “illegal and illegitimate”. “These so-called ‘elections’ are in breach of the letter and the spirit of the Minsk protocol,” the ministers said, adding Russia should “assume its responsibility” in this regard.

The European Council said it welcomed the parliamentary elections of October 26th “which marked an important step in Ukraine’s aspirations to consolidate its democratic development in line with its international commitments”.

Expropriation of land Ms Mogherini also updated ministers yesterday on her recent visit to Israel and the Palestinian territories. In a joint statement following the meeting, m

inisters said the EU “deplores and strongly opposes the recent expropriation of land near Bethlehem and recent announcements of plans for new settlement construction”.