Eta disbands after campaign of violence in which 800-plus died 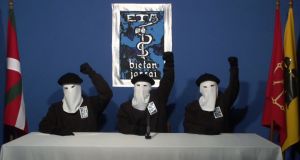 Three Eta militants: now disbanded group complains the nearly 250 of its members in Spanish prisons are deliberately kept in jails far from their families. Photograph: AFP/Gara.net

Basque terrorist group Eta has issued a letter announcing its disbandment, six decades after it formed and eight years after claiming its last victim.

“Eta has completely dissolved all its structures and has ended its political project,” said the letter, dated April 16th, which was sent to several Basque organisations.

“Eta has decided to end its historic cycle and role, bringing to a close its journey,” said the text, which was published by Spanish newspapers.

Founded in the late 1950s, Eta claimed its first victim, civil guard José Pardines, in 1968 and went on to kill over 800 people during its campaign for an independent Basque state.

In its early years, it was widely regarded as an opponent of the dictatorship of Francisco Franco as well as a separatist organisation. In 1973, it killed Luis Carrero Blanco, Gen Franco’s prime minister, with a car bomb. To many people’s surprise, the group continued its campaign of violence after the introduction of democracy and the 1978 constitution, which granted substantial autonomous powers to the Basque region.

By the turn of this century, tight co-operation between Spanish and French security forces had led to the arrest of many of the organisation’s senior figures, leaving it severely weakened. Its last killing was in 2010 and the following year Eta announced a definitive ceasefire. In April 2017, the group staged a disarmament ceremony in the south of France.

“Years of confrontation have left deep wounds and we have to give them the chance to heal. Some are still bleeding, because the suffering is not in the past,” read Eta’s disbandment letter, which also said that the group “acknowledges the suffering caused as a result of its struggle”.

The group’s disbandment had been widely anticipated and is expected to be further formalised in a ceremony in southwest France later this week.

“After [the 2011 ceasefire] now comes Eta’s last communiqué: its disbandment,” tweeted former Socialist congressman Eduardo Madina, who had his leg blown off by an Eta car bomb. “Our victory is complete.”

However, in recent years, Madrid has not rewarded Eta’s move away from violence and that is unlikely to change in the wake of the disbandment.

Eta complains that the nearly 250 of its members who are in Spanish prisons are deliberately kept in jails far from their families. The pro-independence Basque left, which has supported Eta’s political aims, has campaigned for these prisoners to be moved back to the Basque region.

But Pablo Casado, of the governing Popular Party (PP), said recently that Eta “will not get any compensation” for disbanding and specifically ruled out a change in penitentiary policy.

On Wednesday, a group of intellectuals and relatives of Eta victims met in San Sebastián to present a manifesto warning that Eta is seeking to whitewash its crimes. Families of IRA victims were also present at the event.