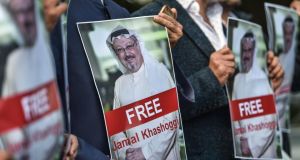 Protestors hold pictures of missing journalist Jamal Khashoggi during a demonstration in front of the Saudi Arabian consulate in Istanbul. Photograph: Ozan Kose/AFP

Turkish president Recep Tayyip Erdogan has urged Saudi Arabian officials to prove without delay that missing journalist Jamal Khashoggi left their consulate in Istanbul last week, amid fears that he was murdered while visiting the building.

“We have to get an outcome from this investigation as soon as possible. The consulate officials cannot save themselves by simply saying ‘he has left’,” Mr Erdogan said during a visit to Hungary on Monday.

“If he walked out of the premises they have to prove it with footage,” he added, calling it “our humanitarian and political duty to closely monitor the case”.

Mr Khashoggi left his homeland for the United States last year because he feared reprisals for his sharp criticism of Saudi Arabia’s rulers, and he has been a contributor to the Washington Post.

Last Tuesday he visited the Saudi consulate in Istanbul to obtain documents for his planned marriage, while his fiancee waited outside; Saudi officials says he left shortly afterwards, but she says he never emerged from the building.

Yasin Aktay, an adviser to Mr Erdogan and a friend of the missing journalist, told Reuters: “My sense is that he has been killed . . . in the consulate.”

He also said that a group of 15 Saudis who were in the consulate at the same time as Mr Khashoggi and left the country shortly afterwards were “most certainly involved” in his disappearance.

Entries and exits into the embassy, airport transits and all camera records are being looked at and followed

“The Saudis are saying we can come investigate, but they have of course disposed of the body,” he added.

The Saudi consulate in Istanbul insists it has no knowledge of Mr Khashoggi’s whereabouts and is trying to locate him.

Mr Erdogan said in Ankara on Sunday that he was “personally” following the case and described it as “very, very upsetting for us that it happened in our country”.

“Entries and exits into the embassy, airport transits and all camera records are being looked at and followed . . . My expectation is still positive,” he added.

The case overshadowed Mr Erdogan’s two-day visit to Budapest and his talks with Hungarian prime minister Viktor Orban, who is accused of implementing a softer version of his guest’s autocratic rule to cement power and stifle dissent.

Mr Orban said Turkey was a crucial partner for Hungary and for Europe in tackling security challenges and stopping illegal migration – the issue on which he built his landslide re-election victory in April.

“It is in the strongest Hungarian interest for Turkey to be able to curb illegal migration . . . Our country thanks Turkey for having received millions of migrants and because of the EU-Turkish agreement [on tackling the issue],” Mr Orban said.

“Not only is our common Nato membership important, but Hungarian foreign policy has a traditional system of orientation. We have to pay attention to three main cities: Ankara, Moscow and Berlin, and that is why we are interested in balancing our relations,” between east and west, he added.

Mr Orban also accused the EU of being “insincere” in dealings with candidate country Turkey, and urged it to decide whether it really wanted “comprehensive, deep cooperation” with the country of 80 million people.