Across Europe, opposition to a special deal for London has been slipping for months

British Prime Minister, David Cameron, has said he wants a 'better deal for Britain' as he arrives in Brussels for a two-day summit of EU heads of state. Video: EU Council 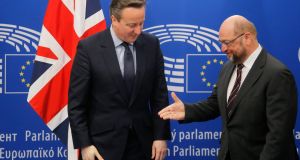 The leaders’ meeting is already being compared to the 1992 summit at which Denmark’s membership of the EU was secured in late-night talks in Edinburgh Castle by in effect granting Copenhagen a form of post-dated treaty change.

Now, 24 years later, Britain is seeking a similar deal as Cameron tries to secure a settlement he can sell to the British people.

The prospect of reaching agreement seems likely. From an EU perspective, the last few months have seen a softening of stance by those countries most opposed to a special deal for Britain, particularly any change to EU free movement rules. The myriad problems facing the union, in particular the refugee crisis, is spurring most countries to resolve the British problem swiftly to allow the bloc to focus on other matters.

Nonetheless there are potential pitfalls over the coming days. EU diplomats were still quibbling over details of the text yesterday, with a number of key sections still in parenthesis, indicating that these details will have to be worked out by leaders.

Unsurprisingly, section D, which deals with migrants’ benefits, remains the most controversial issue. Among the details still being thrashed out is the duration of any emergency brake on such benefits and how the “graduated” system allowing migrants’ access to in-work benefits would work.

The question of when the emergency brake will be triggered is also contentious, with central and east European countries keen to ensure other member states won’t seek to follow Britain in curbing benefits. In this respect, leaders will today try to resolve a paradox underlying the British settlement: how to ensure that the deal does not give preferential treatment to any one state, while at the same time crafting the agreement so that only Britain will use the migrants’ benefits brake.

One solution proposed by the European Commission is that the three EU countries that allowed full access to migrants from eastern Europe in 2004 be permitted to use an emergency brake, a provision that would encompass Ireland, Britain and Sweden.

Despite French resistance to any carve-outs for the City of London, issues surrounding the relationship between euro zone and non-euro zone states appear to have been ironed out, though the question of when euro zone decisions would be referred to all 28 members is still up for discussion.

Another issue is the inclusion of a specific mention of future treaty change in the text. A question in recent days is about why the British declaration needs any commitment to future treaty change when all the changes being offered to Britain are already allowed within the remit of existing treaties.

Apart from the legal and technical challenges that will occupy leaders over the coming 48 hours, there is also the question of the European Parliament. Because some of the changes offered to Britain will require secondary EU legislation, they will require European parliamentary approval.

While parliament president Martin Schulz said this week he could not guarantee its support, the European Council’s canny move to invite senior parliament figures to attend all negotiations over the last few weeks in Brussels means the parliament has already been involved in the drafting and should be on board when it comes to a vote.

As Britain’s negotiations on EU membership enter a crucial phase, these issues are likely to preoccupy leaders, officials and lawyers over the next few days as the European Council does its best to keep Britain in the European Union.