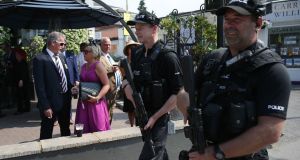 Armed police officers on patrol as racegoers arrive on day one of the Royal Ascot horse racing meet, in Ascot, west of London. Photograph: AFP/Getty Images

The London Metropolitan police commissioner has warned her force is financially stretched and she needs more money to police the capital in the aftermath of recent terrorist attacks.

Cressida Dick said she was in talks with the Home Office and Mayor Sadiq Khan about funding, while a string of other chief constables joined her in warning about the impact of past cuts and future funding changes.

“We need the resources to do the job. We’re stretched and I’m talking with the mayor and the government about the resources we need,” Ms Dick said. “We undoubtedly need a very capable police service in the future for all the reasons people can see.”

The head of counter-terrorism policing, Mark Rowley, is also believed to have written to the home secretary, Amber Rudd, highlighting the need for more resources in the light of the increased terror threat.

He is understood to have stressed his concerns that officers are being pulled away from other priority areas such as child abuse inquiries and organised crime units to support counter-terrorism operations.

Steve Finnigan, the outgoing chief constable of Lancashire, told the Guardian he believes past spending cuts left people feeling less safe and warned that forces across the country had reached a point of no return.

Mr Finnigan, who leaves the police this week after 41 years, is the longest serving chief constable in the UK. He said he understood the need for the police to make a contribution during a period of austerity but that the cuts had been “too quick and too deep”.

He said: “I have said for many years now that there will be a time lag [on the impact of the cuts] and I think we are seeing that now. The cracks are appearing in policing ? We are at a tipping point and we need to have an honest conversation. I do think people are less safe in this country now and I say that with a really heavy heart.”

Although there were spending cuts under the coalition government, the Home Office says police funding has been broadly flat in cash terms since the

2015 spending review when an expected further round of 20 per cent cuts was cancelled in the aftermath of the Paris terror attacks.

Home Office sources say no decisions have been made on changes to the police funding formula, which are expected to hit inner city forces hardest, and no new formula will be introduced without public consultation.

“Police funding has been protected since the spending review in 2015. There is more money and more officers for each Londoner than anywhere else in the country and the Metropolitan police, like all forces, continue to have the resources they need to keep us safe and secure,” said a Home Office spokesperson.

The former Met commissioner Sir Ian Blair said on Wednesday that, as far as he understood it, the Met could lose up to £400 million by 2021 as a result of the changes.

Mayor Khan has said that up to 12,800 more police jobs could be at risk.