The Netherlands risks losing the confidence of Russian gays 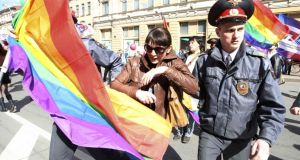 Russian police detain a gay rights activist during a protest in StPetersburg on May 1st last year. Russian gay rights activists have expressed concern about “conflicting messages” regarding Dutch government support for their cause. Photograph: Reuters

When a senior Dutch diplomat was attacked and beaten in his Moscow apartment in October and the letters “LGBT” scrawled in red lipstick on a mirror, the gay community worldwide knew it instantly as a homophobic assault on the Netherlands’ long and uncompromising support for gay rights.

In comparison with Russia, which recently introduced a new law banning homosexual “propaganda” aimed at minors, so-called “gay sex” has been legal in the Netherlands since 1811, and this country probably has the most progressive lesbian, gay, bisexual and transgender (LGBT) rights in the world, from adoption to access to IVF.

That’s why embattled gay-rights activists have always looked to the Netherlands as a touchstone for confirmation of their equal and equally extensive rights as other citizens, an entitlement all too frequently and aggressively denied elsewhere. They have rarely been disappointed by the Dutch government.

An example of that willingness to speak when other countries might diplomatically bite their lips was foreign minister Frans Timmermans’s rejection this time last year of Pope Benedict’s contention that gay marriage amounted to “manipulation of nature” and destroyed the very “essence of the human creature”.

Noting the Netherlands had legalised same-sex marriage in April 2001, the first country in the world to do so, Timmermans said: “If every person is unique and individual, then why should each unique person not have the right to stand up for their own sexual orientation? Why can Romeo marry Juliet but not Julius?”

Given that track record of social liberalism – not to mention the vicious attack on its 60-year-old diplomat, Onno Elderenbosch – it would be ironic if the Netherlands and Mr Timmermans were to lose the confidence of the gay community in Russia when it claims it is under threat from the “repressive” government of president Vladimir Putin.

But that, it appears, is what is in danger of happening.

Although Mr Timmermans, in a written briefing to parliament last month, denounced Russia’s new anti-homosexual propaganda law and suggested it could be grounds for granting asylum to Russian gays, there is a fear that he is rowing back from that position – for reasons that are unclear.

His initial position to parliament was typically direct: “This law contributes to a homophobic climate and has an intimidating effect on LGBT people and their sympathisers.

“Inhuman treatment must be taken as a serious violation of human rights and must be considered in asylum cases. This can include anti-gay laws, but also discrimination by Russian authorities and nationals.”

What troubles Russia’s gay activists is that according to the Russian news agency RIA Novosti, Mr Timmermans has since given an interview in which he said: “At this stage, people who are homosexuals are not being persecuted in Russia, so there are no grounds for asylum in the Netherlands.”

Conspiracy theories abound. Most common is the suggestion that the Netherlands hasn’t the stomach for another bust-up with Mr Putin after a series of diplomatic spats that threatened to scupper a visit by King Willem-Alexander and Queen Maxima to Moscow to mark the end of “Netherlands–Russia 2013”, marking 400 years of “friendly relations”.

The downward spiral began with the detention by Russia of the Amsterdam-registered Greenpeace ship Arctic Sunrise after a protest by activists at a Gazprom oil rig, and the Dutch government’s subsequent complaint to a UN tribunal.

There followed the arrest of senior Russian diplomat Dmitri Borodin in The Hague, and the rapid apology by the Dutch for violating his diplomatic immunity (As it happens, Borodin has just been recalled to Moscow, tweeting before he left on Sunday that his departure was “not entirely my choice”). Then, days after Mr Borodin’s arrest came the attack on Mr Elderenbosch.

So concerned are the Russian gay rights activists about Mr Timmermans’s alleged U-turn that last week their umbrella body handed in a letter at the Dutch embassy in Moscow asking for clarification of the government’s policy on gay asylum-seekers.

The letter said: “If we do not receive clarification of the foreign minister’s conflicting messages we will have to assume that supporting gay Russians has suddenly become a political liability, and so the minister has fallen into line with the official Russian position that persecution of LGBT people in Russia is imaginary.”

It’s an unfinished exchange on which much depends for the international reputation of the Netherlands, in certain quarters at least.