Washington can no longer be relied upon, European Council president says in Sofia 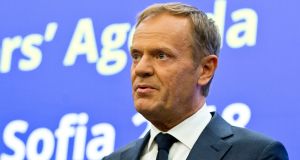 European Council president Donald Tusk during a media conference prior to an EU-western Balkans in Sofia, Bulgaria. Trump “has made us realise that if you need a helping hand, you will find one at the end of your arm”. Photograph: Virginia Mayo/AP

The threat posed by Donald Trump’s administration has been likened to that of China and Russia by Donald Tusk as he condemned the US’s withdrawal from the Iran deal and threat of a transatlantic trade war.

At the start of an EU summit in Bulgaria, the European Council president offered a withering condemnation of Mr Trump’s White House. He said: “We are witnessing today a new phenomenon: the capricious assertiveness of the American administration. Looking at the latest decisions of President Trump some could even think, ‘With friends like that, who needs enemies?’”

Mr Trump’s decision to walk away from the landmark nuclear deal with Iran – to which the UK, France, Germany, Russia and China are co-signatories – is being linked by the EU with the US administration’s refusal to exempt the bloc from steel and aluminium tariffs.

It was clear, Mr Tusk suggested, that Washington could no longer be relied upon.

With member states yet to agree on how to handle the challenges, Mr Tusk called on leaders gathering in the Bulgarian capital, Sofia, to unite behind the tough line being taken by key European actors in response to the White House’s actions.

Theresa May, Emmanuel Macron and Angela Merkel have resolved to stick with the joint comprehensive plan of action with Iran, despite the threats of US sanctions against European businesses.

The European Commission is refusing to open talks on wider trade terms with the US, including import tariffs on cars – a bugbear of the US president – until it receives a permanent exemption from punitive taxes on European steel and aluminium.

Before a dinner with EU leaders, including the UK’s prime minister, Mr Tusk said: “I have no doubt that in the new global game, Europe will either be one of the major players, or a pawn. This is the only real alternative. In order to be the subject and not the object of global politics, Europe must be united economically, politically and also militarily like never before. To put it simply: either we are together, or we will not be at all.

“But, frankly speaking, Europe should be grateful by President Trump because thanks to him we have got rid of old illusions. He has made us realise that if you need a helping hand, you will find one at the end of your arm.

“Europe must do everything in its power to protect – in spite of today’s mood – the transatlantic bond. But at the same time we must be prepared for those scenarios where we have to act on our own.”

Mr Tusk said he wanted the 28 leaders over the next 24 hours to reconfirm that the EU would stick to the deal as long as Iran did. “The deal is good for European and global security, which is why we must maintain it,” he said.

Mr Tusk said the US appeared to be hesitating in hitting European companies doing business in Iran with sanctions, but the bloc still needed to be ready to protect its interests.

It was crucial, he said, that the EU stuck to its guns and refused to talk trade with the US until it received a permanent exemption from punitive tariffs on steel and aluminium imposed by Washington on the grounds of national security.

“The EU and US are friends and partners, therefore US tariffs cannot be justified on the basis of national security”, he said. “It is absurd to even think that the EU could be a threat to the US. We need to bring back reality in this discussion, which is not the case today.”

The leaders of the EU member states are in Sofia to discuss the western Balkans and digital innovation, but the agenda has been hijacked by the need to respond to Mr Trump. – Guardian