Opinion: Even today, any serious investigation of the crimes of the Franco years remains highly contentious 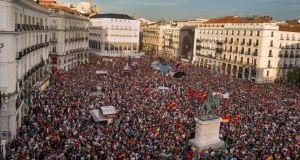 Crowds gather in the main square of Madrid, Spain, after the announcement of the abdication of Spain’s King Juan Carlos. Photograph: Andres Kudacki/AP

The almost unanimously glowing tributes being paid to Spain’s King Juan Carlos I on the occasion of his abdication this week should gave any sceptical observer pause for thought. Can anyone really be this good, this noble, in contemporary politics?

Is Juan Carlos really a man without a shadow? You will find, of course, many references in these tributes as to how his once impeccable standing has been eroded by credible corruption allegations against members of the royal family, and by his own extravagant lifestyle and extramarital affairs. But such matters are little more than peccadillos if what his political obituaries are saying is true. Their core point is summed up in a headline over an article by Javier Cercas in El Pais: “Without the King there would be no democracy”.

If that statement were true, one might ask this question: what kind of democracy needs a king to give it permission to exist? An appropriate counter-statement might be: the kind of democracy that is created on the condition that the war crimes committed by the generals, landlords, bankers and bishops who destroyed Spain’s previous democracy remain immune from investigation, and where the values of the dictatorship that followed that destruction still survive, in the declarations of conservative politicians, clerics, judges and army officers today.

In fact, of course, Spain is a much more complicated – and sophisticated – country than either statement suggests, though each contains a grain of truth. We cannot know what kind of Spain would have emerged without this particular king, but there is no doubt that democratic forces had been boldly hollowing out the structure of the dictatorship for many years.

To live in Spain in the Franco regime’s twilight years was to live in parallel universes. On the street, most of the time, the police state functioned with apparent efficiency. But behind closed doors, international corporations were negotiating with illegal democratic trades unions, and courageous priests were permitting illegal democratic parties to meet in churches and monasteries. Spain was ripe for total change, and the agents of that change were millions of individuals acting collectively, and not a single hero-king.

Juan Carlos certainly deserves considerable credit for facilitating that change, and ensuring it happened in a relatively bloodless way. His courage, patience and necessarily Machiavellian intelligence were quite remarkable. He succeeded, against great odds, in persuading most of the Francoist establishment that nothing significant would change if Spain became a democracy, while convincing the democratic opposition that the changes would be real and substantial. But he is a much more ambiguous figure than his current testimonials suggest.

There are real question marks over the nature and extent of Spain’s much-lauded transition to democracy, and they have their roots in the role of Juan Carlos.

We should not forget that the young prince was closely instructed in the values of the dictatorship by Franco himself. So much so that when he came to the throne very few people expected him to steer Spain towards democracy. Franco famously said, having put in place the succession to Juan Carlos, that “everything was tied up and well tied up”. This is usually interpreted as meaning he expected Juan Carlos to continue the dictatorship in its existing form, and that therefore the king deserves great kudos for cutting the dictator’s knots.

However, there is a darker view: Franco recognised that the dictatorship as such was no longer viable. But he wanted to ensure that the core values he had always defended – the role of the Catholic Church, the primacy of private property rights and, above all, the ‘eternal unity’ of Spain – would survive the transition. He also wanted to ensure there would be no investigation of the crimes he and his supporters had been responsible for. These values are all enshrined in the 1978 constitution that supposedly completed the transition to democracy. And the “pact of forgetfulness”, which was that transition’s tacit condition, prevented people from even erecting decent memorials to the tens of thousands of leftist civil war dead buried in unmarked graves across the country for the next two decades.

Even today, any serious investigation of the crimes of the dictatorship remains highly contentious, in a judiciary that is far from independent of government. And that government is in the hands of a conservative party whose values often sound much closer to those of the hard right in other European countries than to Christian democracy. It is also often said that Juan Carlos ‘saved’ Spanish democracy on the night of the attempted military coup in February 1981.

Another reading, however, is that while the King averted a “hard” coup, he effectively negotiated what most of the army wanted – a “soft” coup tightly limiting the implementation of the already restrictive 1978 constitution. What is certainly true is that Juan Carlos leaves his son Prince Felipe, and Spain, a legacy with a great deal of unfinished democratic business. Calls are already being heard, from voices as sober as that of veteran commentator Inaki Gabilondo, for a “second transition”.

It may be that that transition is already under way, expressed in the shellacking that the two parties that have governed Spain since the transition, the PP and PSOE, both received in last month’s European elections. And in the thousands of people who poured onto Spanish streets on Sunday, calling for a Third Republic.

Paddy Woodworth is the author of two books on Spain. www.paddywoodworth.com