‘Damage limitation’ the priority as Brexit talks overtaken by Covid-19 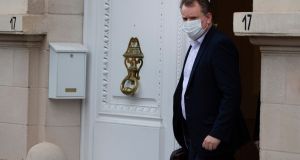 Talk turned to how to limit the damage on January 1st as a resolution remained elusive in talks between the European Union and United Kingdom to set trade terms that must be in place in less than a fortnight.

Deep disruption to travel and freight routes between Britain and its neighbours due to alarm over a new fast-spreading Covid-19 strain sucked up political energy in London just as the need for conclusion became urgent.

UK prime minister Boris Johnson rejected calls from opposition parties to request an extension of the transition period to buy more time for the negotiations – something the EU side has in any case warned London it has already missed its last chance to do. He insisted Britain was ready to face a no-deal outcome on New Year’s Day.

The talks on Monday were described by both sides as difficult, with the division of fishing rights in British waters arguably the most significant outstanding issue.

Political leaders in the European Parliament have agreed that they now have insufficient time to hold a vote on any deal before the end of the year, meaning discussion has now turned to creative ways to manage disruption if a deal is reached but cannot be ratified.

The EU institutions are now making preparations towards a legal route to apply a deal provisionally, to remove the need for tariffs to be levied on trade with the UK until the deal can be officially approved.

Such provisional application would be dependent on the unanimous approval of member states and would be politically controversial. Complications could arise as some member states have national legal hurdles to sign off on the decision.

Raoul Ruparel, a former Europe adviser to former UK prime minister Theresa May with ongoing close connections to the UK government, suggested a deal could be done if the EU offered to cede 35 per cent of the roughly €650 million in fish its boats currently catch in British waters, in an arrangement that would be phased in over five years.

“Both sides should step back from the brink and realise that this is a sensible outcome for both sides,” Mr Ruparel wrote in Politico Europe. “Anything less would be an epic failure at the worst possible time.”

The EU has in recent days offered to give up 25 per cent with a six-year transition period, a hike from its previous position of 15-18 per cent.

This has already provoked stiff resistance from fishing groups as going too far, with Seán O’Donoghue, chief executive of Killybegs Fishermen’s Organisation, slamming the concession as an “unmitigated disaster” for the Irish fishing industry.