Conor O’Clery: Remembering the last day of the Soviet Union 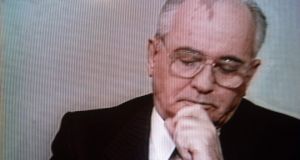 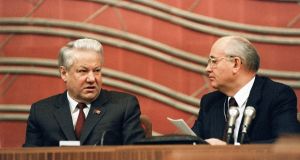 At 7pm Moscow time, on December 25th, 1991, Mikhail Gorbachev checked his spectacles were clean, glanced at his watch, then looked up at the camera and began reading from a sheet of paper.

“Dear fellow countrymen! Compatriots . . . I am ceasing my activities as president of the USSR.”

With these words, 25 years ago this Christmas Day, the last leader of the Soviet Union brought an end to over six decades of communist rule, and power formally passed from the centre to the 15 republics that had been under the Kremlin’s thrall.

The scene of this momentous announcement was a television room in the Kremlin, made to look like Gorbachev’s nearby presidential office.

Behind the cameras were 27 crew members of the US cable network, CNN, outnumbering Russian TV crews.

Minutes earlier Gorbachev had signed a decree giving up his presidency.

His Russian felt pen had not worked, so he had used a Mont Blanc ballpoint, offered to him by CNN president Tom Johnson, and which now rested in his inside breast pocket.

Thus the Soviet Union expired in a fake presidential office, crowded with Americans, and with the stroke of a German pen provided by a Western media executive.

Gorbachev’s resignation had become inevitable three weeks earlier, on December 8th, when the leaders of the three Slav republics, Russia, Belarus and Ukraine, met in a hunting lodge near the Polish border and declared that the USSR had ceased to exist.

The remaining Soviet republics soon followed but Gorbachev had refused to accept the inevitable until December 23rd, when Boris Yeltsin stormed into the Kremlin and demanded that a transition timetable be agreed so he could take over the building as president of newly independent Russia.

Gorbachev had little option but to accede. As Kremlin aide Sergey Grigoryev put it, “Yeltsin had Gorbachev by the balls.”

After 10 hours of dispute and argument in the Kremlin’s Walnut Room, fuelled by vodka and cognac, the two antagonists reached a deal: on December 25th Gorbachev would announce his resignation as Soviet leader, and immediately afterwards Yeltsin would come to his office and take possession of the nuclear suitcase, the chemodanchik, which accompanied the president everywhere, thus symbolising to the world the peaceful transfer of power.

Yeltsin also agreed to allow Gorbachev to remain in his office and state residence for a few days after his resignation, and that the red flag, the symbol of Soviet rule, would fly over the Kremlin until New Year’s Eve when it would be replaced by the Russian tricolour.

Gorbachev had found the encounter with his nemesis distressing. After a triumphant Yeltsin had departed into the night, a comrade came across the Soviet president weeping on a sofa in a resting room behind his office.

By the morning of December 25th, Gorbachev had recovered his spirits.

When he arrived inside the almost-deserted Kremlin to address the world, he first strolled and chatted with Ted Koppel of American ABC Television, to whom he had given free access.

Only the Western media was still interested in what he had to say.

After lunch, as Gorbachev revised the resignation speech, his wife Raisa rang from the state dacha. She was hysterical. Yeltsin had broken the agreement.

His security men had arrived with a notice to quit, and were throwing family possessions on to the drive. Gorbachev was livid.

On the telephone he yelled profanities at Yeltsin’s security chief. “What jerks!” he said to his staff.

Later, having calmed down, he called US president George HW Bush. “Dorogoi [Dear] George,” he cried, “Happy Christmas to you and Barbara!”

He updated Bush on his resignation, and told him, “Watch out for Russia. They will zig and zag.”

The US president was unaware, until he saw ABC News in the evening, that Koppel was in the room with Gorbachev and recording what Bush thought was a private conversation.

Seeing his friend Yegor Yakovlev tearing up with emotion, Gorbachev comforted him. “Well, Yegor,” he said. “Keep your chin up. Everything is only just beginning.”

The CNN crew arrived shortly after 5pm in a long convoy of vehicles. As they crowded into the corridors, Gorbachev’s interpreter, Pavel Palazchenko, expressed dismay that Americans “outnumber the Russians for the final scene”.

Never before or since have Americans enjoyed such intimacy with Russian leaders.

That day, in the Hall of Meetings near the Kremlin, Yegor Gaidar, Yeltsin’s deputy prime minister, was working with an official of the International Monetary Fund on how to introduce to Russia the free market principles advocated by Milton Friedman.

Others were seeking to exploit the chaos. The same afternoon, in a dacha in Vedentsovo, a region outside Moscow, 30 or so tattooed men were finalising the task of dividing the prostrate USSR into regions of influence.

They were leaders of Vorovskoy Mir (Thieves’ World), professional criminals anticipating vast profits from the imminent sell-off of state assets.

Shortly before 7pm another convoy arrived at the Kremlin with sirens wailing. It bore Boris Yeltsin.

He and his henchmen settled into a separate office and switched on the television, joining millions around the world tuning in for Gorbachev’s address.

As he watched Gorbachev’s resignation speech, Yeltsin exploded in fury.

It should have been his day of triumph but Gorbachev implicitly criticised him for “superficial and biased judgments” and did not give Yeltsin any credit for the defeat of an attempted coup in August. “Switch it off,” Yeltsin snapped.

Gorbachev finished his address and wearily closed the file on his speech, an act caught on camera by Associated Press photographer Liu Heung Shing who had been smuggled in with the CNN crew, and which would make the front pages of newspapers around the world next day and help win AP a Pulitzer Prize.

Johnson asked for his pen. Gorbachev apologetically handed back the – now historic – instrument with which he had just signed away the Soviet Union. (The CNN chief later donated it to a news museum in Washington).

Marshal Yevgeny Shaposhnikov, who had been standing by to supervise the transfer of the nuclear suitcase, came to announce that Yeltsin was refusing to show up in Gorbachev’s office.

The now-former Soviet president must come to him and bring the chemodanchik.

“Thus, even in the first minutes after stepping down, I was faced with impudence,” Gorbachev complained.

Pulled down the red flag

Neither man would budge. Shaposhnikov broke the deadlock by acting as a courier.

The transfer of the nuclear suitcase took place in a narrow, dimly lit Kremlin corridor.

The only witnesses were CNN crew members making their way out, with their cameras packed up.

Like everyone else, Gorbachev expected the Soviet flag to continue flying over the Senate Dome until December 31st.

But 20 minutes after his address, on Yeltsin’s orders, two workmen climbed the dome and pulled down the red flag. They gathered it up like waiters removing a tablecloth.

At 7.32pm the white, blue and red Russian tricolour was raised and the bells of the Kremlin’s Saviour Tower started ringing. People in Red Square looked up in astonishment.

Gorbachev’s team did not witness this last act in the drama as the flagpole was directly above their office. Some of them had fought under the red flag during the Great Patriotic War against Nazi Germany and its fate tore at their emotions.

Gorbachev retreated to the Walnut Room with his closest adviser, Anatoly Chernyaev, and a few faithful allies.

As they poured cognac and made sad toasts, Gorbachev expressed his disgust with the leaders of the other republics, former comrades now reinventing themselves as capitalists, not one of whom had called to wish him well.

The 70-year-old Chernyaev wondered why Gorbachev wanted to hang on for an extra few days. He had other concerns on his mind.

The loss of his job made it more difficult to visit his mistress, Lyuda, who lived near the Kremlin.

They stayed drinking until after midnight. When Gorbachev arrived at his presidential residence in the early hours, he was shocked to find clothes, books and personal papers strewn around on the floor.

Yeltsin was the sober one as December 25th drew to a close.

His rapture on seizing power gave way to “a bad case of the jitters” when Shaposhnikov briefed him on the working of the nuclear suitcase and on the dangerous confusion as the Soviet armed forces disintegrated.

The red flag came down almost everywhere after that, but in St Petersburg it continued to fly defiantly from the communist party building. Vladimir Putin, then a city official, ordered its removal.

It was raised and seized several times. Putin lost patience. Under his personal supervision he had the flagpole cut down with a blowtorch.

Many years later, as Russian president, Putin called the collapse of the Soviet Union “a major geopolitical disaster of the century”.

In Russia today, there are no commemorations to mark December 25th, 1991.

Conor O’Clery is former Moscow correspondent of The Irish Times and author of Moscow, December 25, 1991, The Last Day of the Soviet Union (Transworld).