Caravaggio painting may have been located in French attic 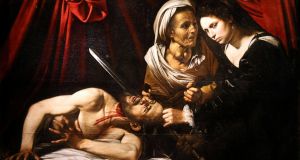 A detail of a painting entitled “Judith Beheading Holofernes” pictured during its presentation in Paris on Tuesday. It is widely believed to have been painted by the Italian master Caravaggio. Photograph: Charles Platiau/Reuters

The art expert Éric Turquin on Tuesday unveiled Judith Beheading Holofernes, believed to have been painted by Michelangelo Merisi, known as Caravaggio, in 1604 or 1605.

The Louvre would like to purchase the painting, which was lost for four centuries. Its owners are asking €120 million. A government decree has forbidden its removal from France. With few exceptions, art experts believe it to be authentic.

Turquin called the painting “the most important discovery of the last 20 years, by a genius of world painting”.

Art historians knew of the painting because it was copied by Louis Finson, a Flemish student of Caravaggio, who was the most famous painter of his time. Finson was also an art dealer who sold his master’s works. Judith Beheading Holofernes was listed in his will, drawn up in Amsterdam in 1617.

The painting was discovered in the attic of a manor house outside Toulouse in 2014. While searching for the source of a leak, the owners of the house found the canvas under the eaves.

“The painting was probably in Spain in the 18th century, since an ancestor of the owners was an officer in Napoleon’s army [which invaded in 1808],” Turquin said. The imperial army looted numerous art treasures. “It was doubtless the violence of the subject that caused Judith to be relegated to the attic,” Turquin added.

The painting shows the Old Testament heroine Judith cutting off the head of the Assyrian general Holofernes, after seducing him and plying him with drink. Her elderly, gout-ridden servant Abra looks on.

Experts say the knotted red drapery, Holophernes’s muscles and the contrast between his suntanned hands and white arms and torso are typical of Caravaggio’s attention to detail. The painter made the dramatic use of light and shadow [chiaroscuro] fashionable, and was a pioneer of Baroque art.

During his short life, Caravaggio was known for violence. He fled Rome after stabbing a young man to death, and was involved in brawls in Naples and Malta.

Caravaggio’s Taking of Christ is on permanent loan from the Jesuit Community on Leeson Street, Dublin to the the National Gallery of Ireland. It too was lost, for some 200 years. Marie Lea-Wilson, a paediatrician, gave it to the Jesuit fathers to thank them for their support after her husband, a district inspector with the Royal Irish Constabulary, was murdered by the IRA.

The Irish Jesuits believed their Caravaggio to be a copy by one of his Dutch followers, and left it hanging in their dining room for 60 years.

Sixty-four Caravaggios have been identified. Finson, the Flemish student, also copied The Ecstasy of Mary Magdalene. It is still missing, perhaps sleeping in an attic or on a convent wall.