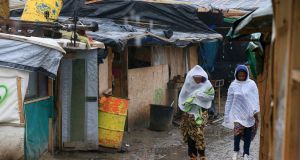 Residents walk through mud in the ‘jungle’ camp in Calais. Photograph: Pascal Rossignol/Reuters

The plight of up to 3,500 migrants in the Calais encampment known as “the jungle” will be decided on Tuesday afternoon by a tribunal in Lille.

A judge will inspect the muddy paths, makeshift shops, homes and school on Tuesday morning to decide whether razing the southern part of the shanty town would constitute “a violation of fundamental human rights”, as maintained in a lawsuit by 10 humanitarian associations and 238 migrants.

If the tribunal approves the evacuation, the migrants have been given until 8pm to leave the jungle.  The prefect of Calais, Fabienne Buccio, says it would then be dismantled on Wednesday.

The French government says between 800 and 1,000 people are to be evacuated.  But volunteers with L’Auberge des Migrants and Help Refugees counted 3,455 people living in the threatened area, including 440 minors.

A group of British activists, including the actor Jude Law and the playwright Tom Stoppard, joined a recital in a makeshift theatre in the jungle on February 21st.

They appealed for minors with relatives in Britain to be allowed to go there.  The Austrian director Michael Haneke intends to shoot a film in the jungle this spring.

The French government wants to limit the encampment to 125 heated converted freight containers, which could house 1,500 people, and the adjacent Jules Ferry Centre, which can house 500 women and children.  Ms Buccio says 2,000 migrants in a city of 70,000 is a “proportionate” number.

But the migrants are reluctant to live in the “secure” area of the jungle, where they must register and check in and out by handprints.

Fewer than 100 migrants took advantage of a week’s grace period offered by Ms Buccio to enable them to move to some 100 “welcome and orientation centres” across France.   They want to remain near the Channel Tunnel, and the mass expulsion is more likely to push them back into Calais, 5km away, and into the surrounding countryside.

The prefect’s decree cites “a situation of extreme tension” presenting “grave threats to public order”.  It says migrants block roads and use violence against lorry drivers and security forces.

In an interview with La Voix du Nord newspaper, interior minister Bernard Cazeneuve called the planned closure of much of the jungle a “humanitarian operation” and said all could be housed in shelters elsewhere.

Britain’s prime minister, David Cameron, has used the necessity of preventing camps similar to that in Calais sprouting up in southern England as an argument in his campaign to keep Britain in the EU.

If Britain leaves, he says, France is likely to reconsider the 2003 Touquet accords, which allow Britain to deploy immigration officers in Calais. French opposition politicians want to revise the accords.

“We must tell the English that we won’t do the work for them and that the English border is not in Calais, it’s in Dover,” said Xavier Bertrand, the conservative president of the region.

By turning back migrants in Calais, Britain prevents them applying for asylum in the UK.  Asylum applications have fallen from 80,000 to 30,000 per year since the Touquet accords.

Proponents of a Brexit say leaving the EU should not affect the bilateral treaty between Britain and France.  Mr Cazeneuve has predicted “a humanitarian disaster” and “tens of thousands of refugees in the Calais area” if France grants migrants free passage to Britain.