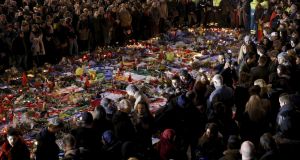 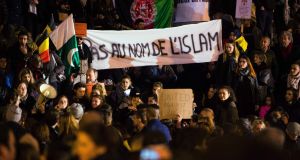 People hold a banner reading “not on behalf of Islam” as they gather to pay tribute to the victims of the Brussels terror attacks, on Place de la Bourse square in Brussels. Photograph: Laurie Dieffembacq/ AFP/Getty Images 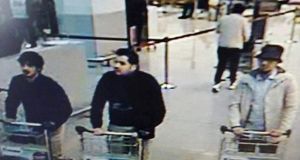 This CCTV image from the Brussels Airport surveillance cameras made available by Belgian Police, shows what officials believe may be suspects in the Brussels airport attack on March 22nd, 2016. Photograph: REUTERS/CCTV/Handout

This man, named only as Faycal C and who media say was the man wearing a hat and a light jacket in the picture at the airport, was charged with taking part in the activities of a terrorist group and actual and attempted terrorist murder.

The prosecutor’s statement said no weapons or explosives had been found during a search of his home.

Two other men, Aboubakar A and Rabah N, were also charged with terrorist activities and membership of a terrorist group. Rabah N was wanted in connection with a related raid in France this week that authorities say foiled an apparent attack plot.

Prosecutors also said they were holding another man, Abderamane A, for an extra 24 hours. He was detained following a series of raids after this week’s bomb blasts at Brussels airport and on a rush hour train.

Another person, Tawfik A, taken in for questioning on Friday, was released.

Earlier on Saturday Belgian media had named the third man seen at the airport with two bombers on Tuesday as Faycal Cheffou and said he was a freelance journalist.

Le Soir newspaper said Cheffou was identified by a taxi driver who drove the attackers to the airport. Earlier it had quoted police sources as saying it was highly likely he was the third man seen at the airport.

Nine people in total have been arrested since Thursday in Belgium and two in Germany, as European authorities swoop on Islamic State militants they link to the bombings at the airport and the metro in Brussels that killed 31 people and to the attacks in Paris last November that killed 130.

The brother of one of the two suicide bombers who died at the airport killed himself in the bomb on the metro.

Belgian authorities asked Brussels residents on Saturday to delay a planned memorial and mourning “march against fear” through the city centre, saying police needed to concentrate on the investigations, as a string of raids and arrests continued.

Meanwhile, the Charleroi prosecutor’s office rules out any militant links in the shooting of a security guard who worked at a Belgian nuclear site two days after the bombings.

The prosecutor oalso denied media reports that his security pass had been stolen and been de-activated as soon as investigators raised the alarm, public broadcaster VTM said.

The office declined to comment when contacted by Reuters.

Le Soir newspaper said the man was a guard at Belgium‘s national radioactive elements institute at Fleurus, to the south of Brussels.

A police spokeswoman said she could not comment because an investigation was ongoing.

In a nation on high alert following this week‘s attacks, the media reports tap into fears about the possibility militants are seeking to get hold of nuclear material or planning to attack a nuclear site.

Brussels Airport said on Saturday it would not reopen for passenger flights before Tuesday following the terror attacks.

A man shot and wounded by police in an operation in northeast Brussels remains in custody amid signs that Belgian and French police were closing in on a Franco-Belgian terrorist cell linked to the Paris and Brussels terrorist attacks.

Video footage of an operation at a major intersection just north of the EU district showed a man lying on the ground at a tram stop holding a rucksack over the tracks, before being dragged away by police.

The arrest followed the detention of eight other suspects in Brussels. Two more people were arrested in Germany.

The developments came as French police thwarted what interior minister Bernard Cazeneuve described as an “advanced terrorist plot”, following the arrest of a man in the Paris suburb of Argenteuil on Thursday night.

The known jihadist is believed to have strong links with a Belgian terrorist cell involved in the recruitment of fighters for Islamic State, including the Paris attacks planner Abdelhamid Abaaoud and Najim Laachraoui, the 24-year-old Belgian who blew himself up in a suicide bomb attack in Brussels airport on Tuesday.

Belgian authorities have faced intense criticism for their handling of terrorist activity in the city.

Reports suggested that police questioned Salah Abdeslam for only a brief period between his arrest last Friday and this week’s attacks and only about the Paris bombings.

This was despite some analysts suspecting that Abdeslam may have intended to take part in Tuesday’s attacks in Brussels.

Belgium’s justice minister Koen Geens, who offered to resign on Thursday, appeared to blame the police for not identifying airport bomber Ibrahim el-Bakraoui, in spite of warnings from Turkey.

“Someone has been negligent and was not sufficiently proactive,” he said.

Further details of the identity of those who lost their lives in Tuesday’s twin attacks emerged on Friday.

Dutch siblings Sascha and Alexander Pinczowski and British citizen David Dixon were among those killed.

A Chinese citizen and two US citizens also died.

Speaking alongside Belgian prime minister Charles Michel in Brussels yesterday, US secretary of state John Kerry said he was grieving with “the loved ones of those who have been very cruelly taken from us , including Americans”.

He noted that 66 countries, including Belgium, had joined the coalition fighting Islamic State.

His comments came as the Pentagon said that Islamic State’s second-in-command had been killed in Syria.

Belgium’s nuclear agency confirmed that the passes of some employees had been withdrawn as a precautionary measure.

The move follows reports that some of the Brussels attackers had video footage of a senior official working in Belgium’s nuclear industry.