Belgium's Federal Police released CCTV footage on Monday (March 28) showing one of the men suspected of being behind the Brussels bombings that killed 35 people and left hundreds injured last week. 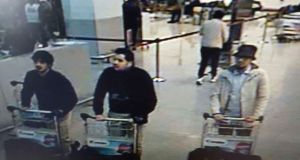 The three men who are suspected of taking part in the attacks at Brussels airport. The man on the right is still being sought by the police. Photograph: Belgian Federal Police via AP

The man whom Belgian prosecutors believed was the third conspirator in the Brussels airport bombing has been released after an investigating magistrate determined there was insufficient evidence to tie him to the attack.

Fayçal Cheffou, who was charged with terrorist murders just four days after the bombings that killed 35 people, was released after the judge concluded that clues leading to his arrest “could not be confirmed by the investigation”, the federal prosecutor said in a statement.

The dropping of charges against Mr Cheffou is the latest in a string of miscues by Belgian authorities who have come under withering criticism for failing to thwart the attacks, even though all three suicide bombers were known to have ties to Islamist radicals.

A senior official involved in the investigation said that while prosecutors had assumed Mr Cheffou was the man depicted in airport CCTV footage alongside suicide bombers Ibrahim El Bakraoui and Najim Laachraoui, they had never definitively corroborated their suspicions through DNA or fingerprint evidence.

“We never confirmed Cheffou was the third man,” the official said. “Assumption has never been considered as proof.”

Mr Cheffou was arrested on Thursday while driving in front of the federal prosecutor’s office in central Brussels. Local media reported he had been identified by the taxi driver who took all three bombers to the airport the morning of the attack. Government authorities appeared so certain of their case that Theo Francken, the state secretary for migration, had called Mr Cheffou an “extremist jihadi creep” in a tweet Monday morning.

Investigators however have now reopened their search for the so-called “man in white”, who is believed to have fled the airport after the suitcase bomb he brought with him failed to detonate.

Belgian police released CCTV footage of the three men walking nonchalantly through the airport’s departures hall, showing the “man in white” chatting casually with El Bakroui and Laachraoui. The release was accompanied by a plea to the public for help identifying the man.

Mr Cheffou had been one of six men arrested by Belgian authorities since last week’s bombing, but none of the others has been directly accused of murder. One of the men has been accused with participating in an unrelated plot that was foiled on Thursday in Paris.

Three other men were charged on Monday morning with participating in the activities of a terrorist group. However prosecutors did not provide details on whether the three men – identified only as as Yassine A, Mohamed B and Aboubaker O – were believed to be linked to the Islamic State cell that carried out the Brussels attacks.

Belgium’s health minister, Maggie De Block, also announced on Monday that the death toll in the twin attacks on the airport and the Maalbeek metro station had risen to 35 after four victims died in hospital from their wounds.

Of the 32 victims who have been identified by investigators, 15 were killed at the airport, 13 at Maalbeek station and four died in hospital. Authorities said nearly 100 people remained in hospital, about half of them still in intensive care.

“Medical teams did all possible,” Ms De Block tweeted. “Courage to all the families.”