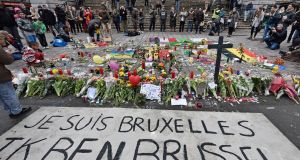 A banner for the victims of the Brussels bombings reads ‘I am Brussels’ at the Place de la Bourse in Belgium. Photograph: Martin Meissner/AP Photo

Belgian police were last night searching for at least one suspect believed to be on the run following Tuesday’s terrorist attacks in Brussels, as the first victims of the atrocities were named.

Two Belgian brothers – Ibrahim and Khalid el-Bakraoui – were named by police as the suicide bombers who detonated bombs in Brussels airport and an underground metro station, killing at least 34 people and wounding hundreds more.

Unconfirmed reports last night suggested the second suicide airport bomber was Najim Laachraoui, a known jihadi who had been wanted by police.

A fourth suspect seen in security footage at the airport wearing a light-coloured jacket was being actively sought by police last night.

With Belgium’s police and intelligence service facing criticism about their handling of the terrorist threat, Turkish president Tayyip Erdogan said Turkey had deported the older el-Bakraoui brother in July last year, but that Belgium had “ignored” Turkey’s warning.

“Always on the run, not knowing what to do any more, being looked for everywhere, not . . . safe any longer,” he wrote in a discarded laptop found near a Schaerbeek house raided by police on Tuesday night.

As 37-year-old Peruvian national and mother of twins Adelma Tapia Ruiz became the first victim to be named, Belgium’s foreign minister Didier Reynder said that more than 40 nationalities may have been caught up in the attacks. No Irish citizens were killed.

US secretary of state John Kerry is due to visit tomorrow, as at least four American citizens remain unaccounted for.

Meanwhile, Minister for Justice Frances Fitzgerald will join justice ministers from across the EU for an emergency justice and home affairs ministers meeting today in Brussels.

As calls for political unity echoed around Europe yesterday, German officials declined to echo remarks by French prime minister Manuel Valls that Islamist terrorism had “declared war not only on France and on Europe, but on the world”.

Asked if Chancellor Angela Merkel shares this view, a German government spokesman said “everyone chooses their own words”.

As police warned the death toll was likely to rise amid reports that nail bombs were used in the attacks, a minute’s silence was held at noon across Belgium yesterday.

In the EU quarter, senior European officials laid wreaths before the Maelbeek metro station entrance, the site of the deadly bomb attack.

European Commission president Jean-Claude Juncker tweeted: “These events hurt us but do not scare us.”

King Albert and Queen Mathilde visited EU officials yesterday and thanked rescue officials at the airport, which will remain closed until Saturday.