British model was ‘too afraid to escape captors’ during shopping trip

British model Chloe Ayling, 20, arrived back at her home in London on Sunday (August 6) after being held captive in Italy by a kidnapper threatening to auction her online unless a ransom of $300,000 was paid. 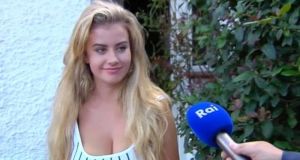 Chloe Ayling speaking to reporters at the weekend after her ordeal

A British model who was allegedly kidnapped in Milan was too terrified to try to get away from her captor when he took her shoe shopping and to buy groceries, her lawyer said.

Italian police said Chloe Ayling was snatched last month by a group calling itself Black Death and is believed to have been drugged and transported in a bag to an isolated village near Turin, where she was held for six days as her captors tried to auction her online.

The 20-year-old was told people were watching her and she would be killed if she tried to flee, meaning she complied with what her captor asked her to do, her lawyer Francesco Pesce said.

He told Radio 4’s Today programme: “She was told that she was going to be sold to somebody in the Middle East for sex.

“She was told that people were there watching her and ready to kill her if she tried anything.

“So she abided to his request, ‘let’s go and buy groceries’ and ‘you need shoes, let’s go buy shoes’ and she didn’t try to flee.

“But I believe she was terrified at the moment and even if she could’ve asked for help she didn’t because she was subjugated to this person, or people as she was given to understand.”

Mr Pesce dismissed suggestions Ms Ayling may have somehow been in on the kidnap, describing it as “evil”.

On Monday, Phil Green, of Supermodels Agency, said Ms Ayling was taken to the British Consulate in Milan after the “horrific ordeal”, but could not return home to London for almost three weeks.

“Chloe had her passport detained by Italian police who would not let her return to the UK until she gave evidence at a pre-trial hearing on August 4th,” he said in a statement.

He added she was able to fly back to the UK on Sunday after attending the crime scene with police and her lawyer the day before.

There was no sign of Ms Ayling at her terraced home in Coulsdon, south London, on Monday.

She said: “I’ve been through a terrifying experience. I feared for my life, second by second, minute by minute, hour by hour.

“I am incredibly grateful to the Italian and UK authorities for all they have done to secure my safe release.”

A Polish man who lives in Britain was arrested on July 18th on suspicion of kidnap and extortion, state police said. Officials released a mugshot of the suspect, named as 30-year-old Lukasz Pawel Herba.

The UK’s National Crime Agency (NCA) said it has been assisting with the investigation. A spokesman said: “The NCA and the East Midlands Special Operations Unit (Emsou) have been working closely with the Italian authorities since the kidnap was reported.

“NCA officers in Italy and specialists from our anti-kidnap and extortion unit are also providing support to the Polizia di Stato as part of the ongoing investigation.

“A house in the Oldbury area linked to Lukasz Pawel Herba was searched on July 18 by Emsou officers with assistance from West Midlands Police.

It is alleged the men tried to sell Ms Ayling online for more than $300,000 and demanded the model’s agent pay to secure her release.

She was kept handcuffed to furniture in the village of Borgial but was freed after six days and taken to the British Consulate in Milan, despite the ransom not being paid, police said.

Italian police said they are working with officials in Britain and Poland as they continue to investigate.