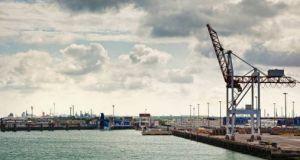 The port of Dunkirk. Arriving at the French town puts Irish lorries well into northern Europe on key motorway networks to suppliers and customers of Irish firms in Belgium, the Netherlands, Germany and beyond. Photograph: Getty Images

The Brexit sea bypass around Britain will be getting busier from January with new routes and more ferries being added between Ireland and mainland Europe.

Like water itself, businesses will always seek the path of least resistance to their customers, and Brexit threatens to throw up plenty of obstacles given the risks posed by new border checks.

Geographically the so-called “landbridge” route to Europe through Britain would always, on a map and in practice as it works now, be more attractive to traders looking to get high-value, time-dependent goods to and from Europe given that the journey can be as short as 13 hours.

But warnings about queues of trucks lined up along English roads heading into new post-Brexit EU-UK border checks at Dover creates uncertainty, and businesses hate uncertainty.

This is why the likes of Danish company DFDS, a major European shipping line that departed the Irish market a decade ago, is back.

The firm’s new direct route between Rosslare and Dunkirk in France, announced on Friday, may take up to 24 hours, but, unlike the risks facing the landbridge post-Brexit, importers and exporters will know they can get goods to and from continental Europe and to customers in predictable times.

Britain offers no such certainty in the age of Brexit and makes long-travelled waters choppy.

The landbridge may eventually settle down and run quickly and smoothly, but given the importance of this route to Europe for Ireland Inc – 150,000 Irish freight units cross it every year – more alternative direct routes will be needed should Brexit congest Britain’s roads to its ports.

The Government has gone as far as telling companies repeatedly over recent weeks to “trial” direct routes and check their supply chains now in light of the risks from imminent Brexit delays.

DFDS is not alone in spying opportunities in Irish waters as a result of Brexit. European shipping line CLdN, already the biggest mover of direct freight between Ireland and mainland Europe, announced a second weekly service on its route between Cork and Zeebrugge in Belgium.

Arriving in Dunkirk puts Irish lorries well into northern Europe on key motorway networks to suppliers and customers of Irish firms in Belgium, the Netherlands, Germany and beyond.

The port also creates options for road hauliers looking to transport goods quickly and at the cheapest cost given that the port has ferries sailing to English ports should the landbridge be less congested for Irish-bound trucks returning with imports from continental Europe.

“It is huge for operators,” said Independent TD Verona Murphy, a former Irish Road Haulage Association president, of the new route to Dunkirk from Rosslare in her Wexford constituency.

“This circumvents all of the arduous regulations after Brexit. It is a slightly longer time on a ship but it provides a certainty of arrival and you can estimate your times.”

The irony of Dunkirk becoming a new entry point to Europe for Ireland in the wake of Brexit when it was the scene of a famous British exit from Europe during wartime is not lost on many.

Shareholders to vote on €718m Applegreen deal 07:46
Top hedge funds reap biggest gains in a decade during pandemic 07:04
Asian shares near record highs as US stimulus plans offset virus woes 06:53
The rich get richer, vaccine uptake and the family business adapts 06:40
Family businesses are welcome winners in the pandemic 05:47

9 ‘I’m normally quite lazy; I don’t really like shopping’