Berlusconi still in Italian politics thanks to secret pact with Renzi 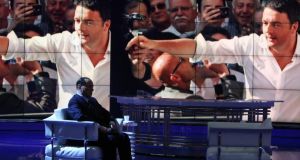 Silvio Berlusconi sits in studio of the ‘Porta A Porta’ TV show while a portrait of Italian prime minister Matteo Renzi is displayed in the background. Photograph: Franco Origlia/Getty Images.

Strange but true, media tycoon Silvio Berlusconi remains politically alive and well. What is more, as things stand, he is guaranteed to have a major say in the election of the next president of Italy, due next week in a joint sitting of both houses of parliament.

Was not Berlusconi rushed out of the prime minister’s office back in November 2011 just before he plunged the ailing Italian economy (and the rest of the euro zone) into the abyss? More recently, was he not expelled from the senate and banned from public office for six years in the wake of a four-year tax fraud conviction?

If Berlusconi, at 78, is still on the field of play, he can thank one man – current Italian prime minister Matteo Renzi.

Last February, within days of taking control of the centre-left Democratic Party (PD), and just days before he pulled the prime minister’s chair from under party colleague Enrico Letta, Renzi met with and made a secret pact (patto del Nazareno) with Berlusconi.

Intended to smooth the parliamentary path of 40-year-old Renzi’s ambitious programme of constitutional and electoral reform, that “pact” made itself felt on Wednesday. When 28 hardline PD senators refused to vote for the new electoral law, the Italicum, Renzi was able to call on the votes of Berlusconi’s Forza Italia to substitute his own party.

What does Berlusconi get in return for the dig-out in parliament this week? Could the answer be a new president who might just be willing to grant him a presidential pardon?

For that remains the great conundrum about Renzi. Is he really an energetic reformer, willing to make a pact with the devil in order to push through his reforms? Or is he an ambitious, cyncial calculator who might yet make common political ground with Berlusconi in order to form a middle-ground party that would look suspiciously like the old Christian Democrat party?

In the meantime, shares in Berlusconi’s Mediaset and Mediolanum companies have risen by 20 per cent and 14 per cent respectively since the beginning of the year. Just coincidence?

What is sure is that after almost one year in office, Renzi has talked a lot and delivered very little. More intriguingly, those issues on which he has delivered, such as labour market flexibility, insurance company incentives and motorway administration, look much more centre-right than centre-left.

Remember, too, Renzi governs with an electoral consensus won (not by him) on a leftist programme. As for his reforms, so far he has nothing on the results board while nearly all the major economic indicators have gotten worse on his watch.

Furthermore, Renzi’s careful courtship of Berlusconi (he met him for the eighth time in a year last week) has prompted much unease amongst PD hardliners. That is one reason why 28 PD senators were unwilling to vote through his electoral reform package last Wednesday.

The other reason for PD dissent is that many feel that the electoral reform Bill is both undemocratic and potentially unconstitutional.

Under the terms of the Bill, upwards of 70 per cent of lower house deputies would be nominated not by the electorate but by the party, thanks to the “fixed list” system. Given that within two or three years, the Senate may have been “reformed” into an entirely non-elected body (another Renzi reform), the undemocratic implications are obvious.

As parliament struggles to agree on a “super partes” candidate for president this week, forcing the left to negotiate with Berlusconi’s Forza Italia among others, even the energetic Renzi may find it difficult to keep both the PD rank-and-file and the centre-right media tycoon happy.

This could be the week when the Renzi ship of state runs onto the rocks.