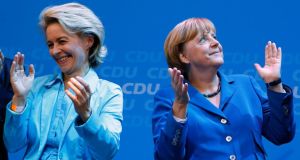 After three months – the longest wait in its postwar history – the German leader still had some surprises when she named her ministers yesterday in a second grand coalition with the Social Democratic Party (SPD).

Support for euro policies
He said yesterday SPD support for his euro policies from the opposition benches of the last Bundestag guaranteed stability and continuity in the years ahead.

“There won’t be a terrible amount of change,” said Mr Schäuble.

As well as finance, the CDU has secured the interior, health and education portfolios. At a press conference yesterday in Berlin, Dr Merkel visibly enjoyed announcing as defence minister Ursula von der Leyen, the first woman to enter the last male holdout of German politics.

“It is an exciting task and a challenging task for her but I’m confident she will master it very well,” said Dr Merkel.

SPD leader Sigmar Gabriel denied that forgoing the finance ministry was a setback for his party. Accepting Dr Schäuble to stay on in finance was, he said, a “sign of respect for his person and achievement”.

Mr Gabriel will head a new superministry for economics and energy, while Frank-Walter Steinmeier returns as foreign minister. Other SPD portfolios include justice, welfare, environment and labour.

Another surprise announcement sees Jörg Asmussen leaving the executive board of the European Central Bank (ECB) to become state secretary in the SPD-controlled labour ministry. Mr Asmussen, a key figure in the ECB’s euro crisis strategy, said he was leaving Frankfurt for family reasons – three years of long-distance commuting – and that there were “definitely no other reasons”.

Ahead of tomorrow’s swearing-in, SPD chief Sigmar Gabriel said Saturday’s SPD grassroots result, in which some three-quarters of voters backed another CDU-lead grand coalition, would “go down in the history books of the SPD but of democracy in Germany”.

“We don’t just talk about grassroots democracy, we practice it,” he said.

That is precisely what the CDU is afraid of, with one Merkel confidant in Berlin groaning: “The genie is out of the bottle now.”

Dual parliamentary system
In its postwar democratic history, Germany has prided itself on being a representative democracy. Its dual parliamentary system has proven its worth, its many advocates say, insulating politics from populism and the kind of extreme referendums that saw the Nazis secure their grip on power.

But the SPD vote is likely to increase calls for greater direct democracy, which is already commonplace at state level. Progress towards it has been slower at federal level. A month ago in coalition talks the SPD and CSU called for the introduction of referendums on European affairs, “in particular the admission of new member states, when important competences are transferred to Brussels or when it involves financial contributions of Germany to EU level”.

No sooner had their proposal been leaked than it was smothered by the CDU as a dangerous “weakening of parliament”.

Dr Merkel is no fan of direct democracy, warning a year ago that it allows “those with good persuasive ability and material means to exert greater influence over decisions”.

She is quick to disagree with anyone – from constitutional court judges to even Mr Schäuble – who suggest the transfer of powers to Brussels during the euro crisis has brought forward the need to adopt a new German constitution by referendum.

“The SPD vote is now in the political memory and it will be more difficult to reject calls for similar votes in the future,” said Dr Gero Neugebauer, political scientist at the Free University Berlin.

“That said, the SPD vote is only one step in that direction: it doesn’t open the door itself to direct democracy.”