Barnier has made Border the central plank in his negotiating strategy 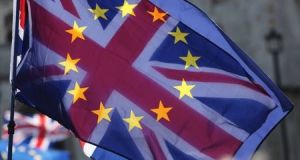 The destructive forces who promoted Brexit in the first place are digging in for a fight. Foreign secretary Boris Johnson, who lied his way through the referendum campaign, is at it again

There is poetic justice in the way the European Commission has made the Irish Border a key Brexit priority considering the subject barely rated a mention during the entire referendum debate in the UK in 2016. The priority given by the commission to Ireland is in stark contrast to the British Conservative government’s failure to give a moment’s thought to the fate of a component part of the UK in the Brexit debate.

The outrage in the UK at the commission’s stance on the legal status of the Border should be taken with a grain of salt in light of the scant regard the advocates of a hard Brexit have shown for either part of Ireland in the whole process.

Incidentally, the commission’s approach also gives the lie to the assumption by a number of prominent Irish politicians and commentators that this country’s interests would be traded away by the EU without a moment’s hesitation when the negotiations started.

In fact the opposite has happened, and lead EU negotiator Michel Barnier has confounded not only the British but some Europeans by making the Irish Border the central plank in the commission’s negotiating strategy.

We shouldn’t ignore the fact that the Border gives Barnier a useful weapon in his tussle with UK negotiators, but there is also something deeper at work: a sense of solidarity among member states which goes to the core of what the EU is all about.

That said, Barnier’s hard line on the Border doesn’t mean there isn’t going to be one if the UK leaves the customs union and the single market, and we need to be aware of the fact that it will be imposed by the EU side and not the British.

Arch Brexiteer Bernard Jenkin gave a clear insight into British thinking in an interview on BBC’s Newsnight on Tuesday. Claiming prime minister Theresa May shared his view, he said the British had no intention of imposing border controls in Ireland but he rightly predicted the EU would have to do so to protect the customs union and single market.

One of the beneficial effects of the Barnier approach is that it has brought home to the British that it is time to face the reality of what Brexit involves. Up to now even many who want to remain in the EU have not grasped what leaving means .

A recent visit to Dublin by members of the Welsh Select Committee from the House of Commons illustrated the point. The committee contained Remainers as well as Leavers, but all were taken aback at a meeting with the Oireachtas EU Affairs Committee by the strong line adopted by TDs and Senators in support of the Barnier line.

Given the negative implications for the Irish economy, and also, incidentally, for the Welsh ports, they had expected the Irish politicians to be more willing to indulge British notions that they could leave the EU without too much difficulty.

The Labour MPs on that delegation were convinced that the UK would ultimately remain in the customs union. The conversion of Labour leader Jeremy Corbyn to that position has improved the chances of that happening, and may even portend a change of government in the UK.

The growing confidence of British politicians who support a soft Brexit and the overwhelming evidence of the damage a hard one will do is beginning to have an impact.

An instance was the public intervention of Sir Martin Donnelly, former top civil servant at the department of trade. He dismissed the chances of UK trade deals around the world as akin to hoping for “a fairy godmother”, and went on to describe leaving the EU in pursuit of such deals as “rejecting a three-course meal in favour of the promise of a packet of crisps”.

On the other hand the destructive forces who promoted Brexit in the first place are digging in for a fight. Foreign secretary Boris Johnson, who deliberately mislead people during the referendum campaign, is at it again.

While publicly proclaiming that the Irish Border can be managed as easily as moving from one London borough to another, Johnson has written to May suggesting that the British should not worry about the Border one way or another.

That is only to be expected from Johnson who behind his buffoonery is a deeply cynical and dangerous politician prepared to say or do anything in pursuit of his ambition to become prime minister.

With a range of issues coming to a head in the coming weeks and months it is impossible to know where it will all end, but at least there is now a better chance than was the case a few months ago that the advocates of a soft Brexit will prevail.

If that happens, and the UK remains in the custom’s union, then all of the agonising about the Border will prove academic. Yet the prominence given to the issue by the EU may well prove to have been one of the key factors in forcing the British to face reality.