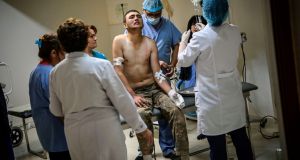 An Armenian wounded soldier getting treatment in a medical centre outside the city of Stepanakert on Wednesday, during the ongoing fighting between Armenia and Azerbaijan. Photograph: Aris Messinis/AFP via Getty Images

Azerbaijan has struck targets inside Armenia as their conflict over the disputed region of Nagorno-Karabakh threatens to escalate further and inflame tension between regional powers Russia and Turkey.

Baku’s forces said on Wednesday they had destroyed two missile launch sites on Armenian territory as they prepared to fire at Azeri cities. Yerevan confirmed the Azeri strikes but denied targeting any non-military areas in Azerbaijan since fighting in and around Nagorno-Karabakh erupted late last month.

Hundreds of people have been killed and thousands displaced in clashes over a region that is officially part of mostly Muslim Azerbaijan but has been run by its Christian Armenian majority since a war in the 1990s that claimed about 30,000 lives.

Turkey has given full backing to its Azeri allies and their push to regain control over Nagorno-Karabakh. Russia has sought to maintain close ties with both ex-Soviet states, but has a military base in Armenia and an obligation to defend it as a fellow member of the Collective Security Treaty Organisation.

A ceasefire that Russia brokered between Baku and Yerevan last weekend has not been respected, and the first Azeri strikes on Armenian territory raise the question of whether Moscow would be willing to intervene militarily in the south Caucasus.

“Azerbaijan not only refuses to implement the ceasefire . . . but also, with the blatant instigation of Turkey, seeks to expand the geography of the Nagorno-Karabakh conflict, attacking and resorting to open aggression against the sovereign territory of Armenia,” said the foreign ministry in Yerevan.

Baku insisted it was within its rights to destroy military targets in Armenia that allegedly threatened Azeri civilians, and vowed to do so again if necessary.

“Azerbaijan has no military objectives or interests on the territory of Armenia,” the Azeri defence ministry said. “On the contrary, Armenia, by opening fire on settlements in Azerbaijan, is deliberately trying to expand the geography of the conflict.”

Russian defence minister Sergei Shoigu spoke to his Azeri and Armenian counterparts and urged them to “fully meet the commitments” of a ceasefire that was supposed to begin last Saturday.

Azerbaijan’s autocratic president Ilham Aliyev declared that his country’s forces had taken control of eight villages in the conflict zone, while Armenian prime minister Nikol Pashinyan acknowledged that Nagorno-Karabakh’s troops had been forced to “retreat a little” in some areas.

“We don’t agree with the position expressed by Turkey and also by president Aliyev a few times . . . that a military solution to the conflict exists and is permissible,” Russian foreign minister Sergei Lavrov said on Wednesday.

Mr Pashinyan says strong Turkish support has emboldened Azerbaijan, and Mr Aliyev insists that Ankara must play a key role in efforts to resolve the conflict.

Turkey denies reinforcing Azeri ranks with fighters sent from Syria, where – as in Libya – Ankara and Moscow back opposing sides in a conflict.