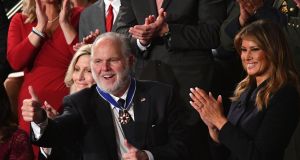 Radio personality Rush Limbaugh after being awarded the Medal of Freedom by first lady Melania Trump during US president Donald Trump’s State of the Union address in Washington, DC. Photograph: Mandel Ngan/AFP/Getty

At 6.38am, WABC radio in New York is blaring a commercial for mypatriotsupply.com, a company that sells survival gear, tinned food, gas stoves, water purification tablets, sprouting seeds and just about everything else you might need in the event of civilisation breaking down.

It’s never too early to be thinking apocalyptically because this is The Bernie and Sid Show, a staple of right-wing talk radio, a world where they daily caution listeners that a Trump defeat on November 3rd will herald the death of the American way of life. So, best be prepared.

Bernard McGurk (Irish-American of course) and Sid Rosenberg are a pair of wily New York broadcast veterans now ploughing a lucrative furrow as full-time Trumpers, constantly mythologising his presidency and eviscerating his opponents.

Dr Anthony Fauci is Dr Phoney. Black Lives Matter are “cop-killers”. People who wear masks are sheep. The Democrats are communists. Joe Biden is a dementia patient and a stooge. The malevolent hand of George Soros lurks everywhere. They serve up a four-hour long smorgasbord of relentless propaganda before the clock has even struck ten.

If Fox News affords the rest of the world a chance to take the pulse of the denizens of Trump Nation, right-wing talk radio offers a far more comprehensive diagnosis of the troubled patient. For 15 hours a day, a selection of hosts, equal parts apologists, spindoctors, and brazenly jingoistic shills, dominate the airwaves.

From Bernie and Sid at dawn to Mark Levin running from six to nine in the evening, carnival barkers like Brian Kilmeade, Michael Savage, Ben Shapiro, Sean Hannity and Rush Limbaugh provide the background cacophony in kitchens, offices, stores, factories, cars and trucks across America.

Deft and skilful exponents of the bloviating art, no Trumpian offence cannot be explained away, no egregious lie cannot be spun into a kind of truth. To them, he contracted Covid-19 as a consequence of his bravery getting out there to try to win the election for the American people, and his handling of the entire crisis has been exemplary.

Those presidential soliloquys that go viral on social media as fresh evidence of his mania, they play and replay them as examples of his Churchillian speechifying. Theirs is a bizarro world where up is down, in is out, black is white and Trump is never wrong. They do not just support him (as they did, say, George W Bush), they deify him.

During the latest wobble in his campaign last week, it was no coincidence that Trump sought solace in the comforting embrace of Rush Limbaugh, spending two-hours in the middle of an alleged work day chatting on air with the grand poo-bah of the medium. Sounding like a pair of cantankerous geezers railing against the modern world and constantly talking over each other, they produced radio gold for the 15 million or so devotees of his show.

The original of the conservative (with a capital C) talk show species, Limbaugh is the man who applied shock jock principles to political coverage during the Clinton presidency and created this most bombastic genre. Helpfully, Bill and Hillary’s recklessness, from Epstein to emails, continues to supply plentiful fodder.

Initially serving as an especially raucous Greek chorus, talk show hosts have evolved over recent years into serious players on the political stage. Hannity is a trusted member of Trump’s kitchen cabinet, sometimes referred to as his unofficial chief of staff, and the two men reportedly talk on the phone nightly. His then is the most influential echo chamber in America.

To figure out where the president stands on an issue or where he’s likely to go next, you merely need to tune into the Long Islander’s syndicated radio show at 3pm every afternoon. He earns $20 million a year (and nearly the same again from Fox) spending three hours a day peddling science denial, conspiracy theories and practised whataboutery, all the while convincing listeners he’s not a slumlord, just a down home blue collar boy who happens to own apartment complexes all over the deep south.

Hannity, Limbaugh and the rest profit from keeping their audiences in a permanent state of agitation, stoking fears about bogeymen bearing down on the US, coming to take their guns and their God.

Over the past two decades it has been Muslims (Hannity warned they would impose Sharia law like they apparently have in parts of Britain!), Mexicans (the Democrats will grant them all the right to vote!) and Obama (once getting in a tizzy about him ordering Dijon mustard). Now it’s Antifa and Black Lives Matter wanting to defund the police, destroy the great cities of America, and impose communism.

This cabal behind the daily diet of on-air confirmation bias is one of the most powerful lobbies in American politics. Ever wonder why moderate Republicans fail to speak out every time Trump defiles the office he holds?

The answer is on the radio dial. Elected representatives live in dread of being labelled a Rino (Republican in name only) by Hannity or Limbaugh, a potentially career-ending accusation that might lead to them being primaried by their own constituents.

More than any party whip, the blowhards behind the microphones possess the ability to cow senators and congressmen and women, and to keep them in line.

If all these hosts have different styles, the one constant in every show is a preponderance of bizarre commercials showcasing ersatz nationalism or fomenting paranoia.

There are ads hawking guns, gun safes, gold bars (don’t trust the banks, the economic collapse is always imminent) and a family defence guide (including helpful information about how to survive a mass shooting).

Then there are products playing the patriot card such as clothing from myloveofcountry.com and Black Rifle coffee, for people who support the right to bear arms, love America and enjoy beans from Brazil and Colombia.

Their story and they are sticking to it.