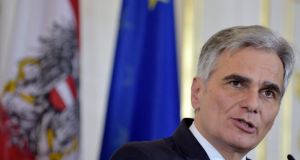 Austrian Chancellor Werner Faymann in Vienna on Wednesday. He made clear the national measures were an attempt to force agreement on a “European Plan A” for sharing the migrant burden. Photograph: Hans Punz/EPA

Europe’s passport-free Schengen system developed another serious crack on Wednesday after Austria vowed a “considerable” step-up in border controls and a two-thirds cut in the number of asylum applications it will accept this year.

“We have to step up considerably checks on our borders as an emergency measure,” said Chancellor Werner Faymann. He made clear the national measures were an attempt to force agreement on a “European Plan A” for sharing the migrant burden.

With no agreement in sight, however, Austrian federal and state leaders agreed on unilateral measures to prevent their country being “swamped”.

As yet it is unclear what will happen when the yearly quota is filled. Austrian officials said they would put together reports to propose options that were in line with Austria’s constitution as well as European law.

Finally Vienna has promised to look again at welfare options for asylum seekers to reduce the “pull” factor into the country.

News of the cap prompted dismay among Austrian church and human rights leaders, who reminded Vienna leaders that the right to apply for asylum is a fundamental human right, not subject to arbitrary limits.

But Austrian interior minister Johanna Mikl-Leitner insisted that an upper limit was a political reality “whether we want to have it or not”. “If we do nothing we will have thousands of homeless [refugees] by the summer,” she said.

Long-term migration tensions in Austria grew still further in the new year when Germany began sending back over the border up to 300 people who did not want to file for asylum there.

Austria said it was anxious to work with the German authorities to prevent a border stand-off with Bavaria.

Across the border in Bavaria, migration pressures will top the agenda at a meeting of state politicians from the ruling Christian Social Union (CSU) with Chancellor Angela Merkel.

State CSU politicians, on the front lines of the migration crisis that still attracts more than 2,000 people daily into the southern German state, have vowed that Dr Merkel will “not be spared” their fury.

Last year Germany accepted 1.1 million asylum seekers but Dr Merkel has so far resisted pressure to introduce a national cap, vowing instead to reduce numbers with EU and international measures.

1 Fatal police shooting in Kentucky cuts to heart of community divisions
2 ‘Summer is not lost’ - Taoiseach announces accelerated easing of coronavirus restrictions
3 Coronavirus: People to be allowed to travel anywhere in their county from Monday
4 California police fatally shoot 22-year-old man on knees with hands up
5 Donald Trump is in trouble, and that could spell very bad news
Real news has value SUBSCRIBE