US secretary of state Pompeo to visit North Korea next week 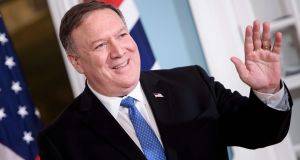 US secretary of state Mike Pompeo: told lawmakers he was confident that North Korea understood the scope of the US desire for complete denuclearisation as the two countries negotiate after the summit. Photograph: Brendan Smialowski/AFP/Getty Images

US secretary of state Mike Pompeo plans to travel to North Korea next week to discuss the country’s denuclearization plans, the Financial Times reported on Thursday, citing four people familiar with his plans.

US officials said Mr Pompeo had cancelled a meeting with his Indian counterpart in Washington on July 6th in order to fly to Pyongyang, the newspaper reported. His visit would mark the first to North Korea since US president Donald Trump and North Korean leader Kim Jong Un held their June 12th summit in Singapore.

A State Department official would not confirm the report and told Reuters there were no travels plans to announce.

On Wednesday, Mr Pompeo told lawmakers he was confident that North Korea understood the scope of the US desire for complete denuclearization as the two countries negotiate after the summit.

“We’ve been pretty unambiguous in our conversations about what we mean when we say complete denuclearization,” Mr Pompeo told a Senate Appropriations subcommittee hearing on funding for the State Department.

Mr Trump has drawn some criticism from national security analysts for an agreement that emerged from his June 12th summit with Mr Kim that had few details on how Pyongyang would surrender its nuclear weapons and ballistic missiles.

A day after that summit Trump said on Twitter there “is no longer a Nuclear Threat from North Korea.” Mr Pompeo characterized the situation by telling the Senate subcommittee that “we have reduced risk.”

Critics in the United States said the agreement from the Trump-Kim meeting was short on detail and that the Republican president had made too many concessions to Mr Kim, especially agreeing to stop military exercises with South Korea, which the North has long sought.

North Korea is under UN sanctions for its nuclear and weapons programs and is widely condemned for human rights abuses.