Abdelhamid Abaaoud: The brains behind the slaughter 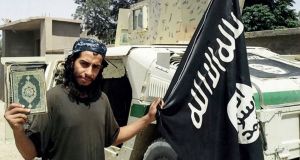 Abdelhamid Abaaoud (28) was the target of the French police raid on a building in Saint-Denis in the early hours of yesterday morning. He is believed to have been the mastermind behind the attacks that killed 129 people in Paris and Saint-Denis last Friday.

The 26-year-old French woman who detonated her suicide vest is believed to have been Abaaoud’s cousin, and police thought she was sheltering him.

Abaaoud, a Belgian citizen, grew up in Molenbeek, Brussels, where his father Omar had a clothing store in the rue Prado. As a child, he was friendly with the Abdeslam brothers, two of whom participated in the Paris attacks. Brahim Abdeslam died. Salah, who was closer to Abaaoud, survived and is still on the run. Abaaoud and Salah served time in prison together for armed robbery.

When Abaaoud first went to Syria in 2013, he joined Islamic State’s “immigrant brigade,” comprising Europeans with a poor grasp of Arabic. He took his 14-year-old brother Younes with him, and the child was filmed shooting an American in the head for an IS propaganda video.

Abaaoud started at the bottom in IS, looking after dead bodies. In March 2014, French journalist Etienne Huvert was given videos of French jihadists by members of the Free Syrian Army, an opposition group that is favoured by the French government.

One video shows a young man whom intelligence services say is Abaaoud, driving a pickup truck that bounces across Syrian fields, dragging the bodies of dead civilians behind it.

“He’s completely casual when dealing with death,” Huvert said. “He’s laughing and joking alongside blood and corpses. You can also tell that, despite being a jihadist among others, he’s already acting like a leader.”

Abaaoud, like “Jihadi John”, is one of the faces of IS best known to western media. He appeared in IS’s magazine Dabiq, holding a Koran in one hand and the group’s black banner in the other, in front of an armoured vehicle. He sports a long, scraggy beard and hair, and wears a camouflage bandana around his forehead.

Like other French-speaking jihadists, Abaaoud rose quickly in the ranks of IS. He reportedly graduated from undertaker to recruiter to a planner of attacks. A returning jihadist told French officials that Abaaoud worked for IS’s intelligence and espionage service, known as EMNI.

In that capacity, he allegedly headed the jihadist cell in Verviers, Belgium, which police raided days after the Charlie Hebdo attacks last January.

Abaaoud has been linked to several attacks in Europe. He served in the same unit as Mehdi Nemmouche, the Frenchman who killed four people in the Jewish museum in Brussels in May 2014. Nemmouche lived briefly in Molenbeek, the rear base for the Paris attacks, on his return from Syria.

Last summer, Abaaoud instructed Reda Hame, a returning French jihadist, to “hit a concert hall to make a maximum number of victims”. Hame was arrested on his return, but others carried out Abaaoud’s orders on November 13th, to devastating effect.

Police scientists identified Fabien Clain’s voice as the one claiming responsibility for the Friday’s killings, in a five-and-a-half-minute audiotape condemning Paris as “the capital of abominations and perversion” and warning: “This attack is but the beginning of the storm.”

The chant that is heard before and after Clain’s peroration is sung by his brother, Jean-Michel.

Fabien Clain is described as a very persuasive man with a talent for converting others, including over the internet. Several of his disciples moved with the Clain brothers and their families to Syria around 2014.

Fabien and Jean-Michel Clain once used the stand where they sold Islamic trinkets in the market in Toulouse to convert young people. Both married French women who had converted to Islam. Because their wives wore the burka, locals referred to the family as “the Belphegor clan”, after the demonic prince of hell.

Olivier Corel, a spiritual leader of Syrian origin known as the “white emir”, established a sort of Islamist colony – a model Clain later reconstructed in Syria – on his farm at Artigat, a small town in the Ariège departement. It was there the Clains met the brother of Mohamed Merah, the “scooter killer” who killed seven people in Toulouse and Montauban in 2012, and Sabri Essid, the brother-in-law of the Merahs.

Clain’s name appeared in a 2009 case involving the Bataclan concert hall. The then owners were Jewish and sponsored an annual concert in support of the Israeli border police, the Magav. The Clain brothers and two of their friends were suspected of having threatened the Bataclan.

When he was accused of involvement in an attack that killed a French lycée student in Egypt in 2009, one of Clain’s friends, Farouk Ben Abbes, denied the charges but confessed to planning an attack on the Bataclan.

Fabien Clain was convicted of organising for young Frenchmen to travel to Iraq to fight with al-Qaeda in 2005-06. He served three years of a five-year sentence. After his release in 2012, he took his family to Normandy, then Syria. His name surfaced in a terrorism case last April, when an Algerian student called Sid Ahmed Ghlam botched an attack on a church in a Paris suburb. Ghlam was in contact with two men who had been indoctrinated by Clain.