A deal averts the worst, but Ireland’s future will be different 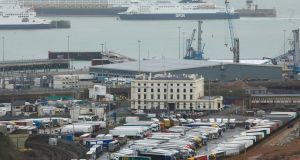 The disruption to freight passing through Britain after France blocked lorries and imposed requirements for negative Covid-19 tests for drivers this week showcased Ireland’s vulnerability to problems on the UK landbridge. Photographer: Luke MacGregor/Bloomberg

Barring late surprises like a rebellion in Westminster or by an EU member state, a last-minute deal clinched between Europe and the United Kingdom would avert the worst of Ireland’s fears on January 1st.

A no-deal would mean tariffs coming into force on many products and particularly heavy levies on agrifood products, hammering an industry which has traditionally been focused on exports to Britain.

The cost would be up to 100,000 jobs, according to a Central Bank forecast, a prospect that made the Irish Government cheerlead for a deal with increasing enthusiasm as time grew tighter.

But though the expected deal would avoid the worst, it seals in place a very different relationship with the United Kingdom than what came before, which will mean profound long-term changes to the Irish economy.

The terms reflect a “hard Brexit” interpretation of the 2016 referendum that was an extreme minority position during the campaign itself, and only came to dominate with the ascent to power of prime minister Boris Johnson and his hardline allies.

Under a deal customs declarations will be required on trade between Britain and the European Union, a formality that adds costs to businesses and will mean the ease of trade long enjoyed between the islands is a thing of the past.

There will be many changes to day-to-day interchange between the jurisdictions. UK professional qualifications will no longer be automatically recognised in the EU. UK nationals will require visas for stays of over 90 days in any 180 day period for most of the continent and need proof of health insurance – terms familiar to non-EU visitors like Australians. Each sector of the economy has new requirements that will cause friction where there was none before.

The end of seamless trade will mean that long-term, economic orientation towards or via Britain will make less sense for Ireland.

The disruption to freight passing through Britain after France blocked lorries and imposed requirements for negative Covid-19 tests for drivers this week due to fears of an infectious new strain showcased Ireland’s vulnerability to problems on the UK landbridge.

The change on January 1st is unlikely to be seamless, particularly as aspects such as the UK’s new IT system are almost untested and companies are being given hardly more than a week to adjust to the final details of how the new system will work.

Short or medium-term disruption aside, businesses should not expect trade via Britain to return to what it was before. For the whole island of Ireland, the conditions that determined old supply chain routes have changed, and changed permanently, tipping the balance towards direct links with the rest of the EU.

This accelerates a trend facilitated by Ireland’s joining of the EU’s predecessor the European Economic Community in 1973, after which trade with Britain comparatively shrank, while growing with the rest of the world.

That year, the UK bought 55 per cent of Irish goods exports. In 2019 it bought just 10 per cent. It was superseded as a destination for Irish exports by the rest of the EU in the 1980s, and by the United States in the 2000s.

Agreed in a rush, the full implications of what the new trade terms with the UK and the the Northern Ireland protocol will mean in practice will only fully emerge in time.

Economic, cultural, and political change go hand in hand. Brexit was not Ireland’s decision or preference, but the consequence is that it will orientate us economically and politically towards the continent.