Cuba says removal from US terrorism list a ‘fair decision’

Residents of Havana welcome President Obama's decision to remove Cuba from the list of state sponsors of terrorism. VIdeo: Reuters 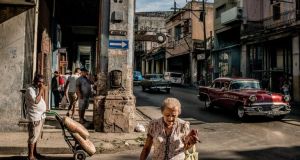 The White House will eliminate a major diplomatic hurdle by pushing to have Cuba dropped from a list of state sponsors of terrorism. Photograph: The New York Times 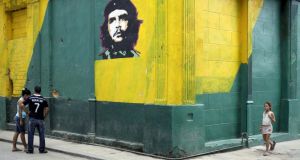 An image of revolutionary hero Ernesto Ché Guevara is seen on a street in Havana. US president Barack Obama met Cuban president Raul Castro on Saturday in the highest-level talks between the two countries in nearly 60 years. Photograph: Enrique de la Osa/Reuters

Cuba recognised what it called a “fair decision” by US president Barack Obama to inform Congress he intends to remove Cuba from a US list of state sponsors of terrorism.

“The Cuban government recognised the fair decision made by the president of the United States to eliminate Cuba from a list that it never should have been included on, especially considering our country has been the victim of hundreds of acts of terrorism that have cost 3,478 lives and maimed 2,099 citizens,” said the statement by Josefina Vidal, the Cuban foreign ministry’s chief of US affairs.

President Obama told Congress on Tuesday he intends to remove Cuba from a US list of state sponsors of terrorism, clearing the main obstacle to restoring diplomatic relations and reopening embassies shut for more than half a century.

For Cubans, the terrorism list was a particularly charged issue because of the US history of supporting exile groups responsible for attacks on the island, including the 1976 bombing of a Cuban passenger flight from Barbados that killed 73 people.

The attack was linked to Cuban exiles with ties to US-backed anti-Castro groups, and both men accused of masterminding the crime took shelter in Florida, where one, Luis Posada Carriles, still lives.

“It’s really good that they finally took us off the list even though the reality is that we never should have been there,” said Rigoberto Morejon, a member of the Cuban national fencing team who lost three training partners in the bombing.

Mr Obama and Cuban president Raul Castro sat down at a Western Hemisphere summit in Panama on Saturday for the first meeting of its kind between US and Cuban leaders in nearly 60 years.

Cuba’s communist government had said normal relations between the two former Cold War foes would be impossible as long as it remained on the US blacklist. Mr Obama ordered a review of Cuba’s status after he and Mr Castro announced a diplomatic breakthrough in December.

Cuba was placed on the list in 1982 when it was aiding rebel movements in Africa and Latin America, but Havana long ago ceased supporting foreign insurgencies. Presence on the list, however, has continued to limit its access to international banking and overseas financial markets.

Foreign investors in Cuba said delisting the country would prove positive for the Caribbean island‘s economy. Banks could legally do business with Cuba while it was on the list but the regulations proved onerous, leading 20 banks to stop doing business with the Cuban government or Cuban interests in third countries over the past 18 months, Cuba said.

US secretary of state John Kerry said in a statement welcoming Mr Obama’s decision that “circumstances have changed since 1982,“ when Cuba was listed “because of its efforts to promote armed revolution by forces in Latin America.“

Congress has 45 days to consider Mr Obama’s decision before it takes effect, but lawmakers cannot stop it unless both chambers approve a joint resolution, a move that is highly unlikely.

Many of Obama‘s fellow Democrats hailed his decision and some experts said it was long overdue.

But US senator Marco Rubio, a Cuban-American lawmaker from south Florida and newly announced Republican presidential candidate, denounced it as a “terrible” decision, saying Cuba was helping North Korea evade sanctions and was harbouring fugitives from American justice.

The fugitives include Joanne Chesimard, wanted in the killing of a New Jersey state trooper in the early 1970s.

Mr Obama could have announced his intention to lift the terrorism designation and move forward on restoring diplomatic relations at last weekend’s summit.

But US officials privately said they saw the issue as leverage in broader normalisation negotiations.

Cuba’s removal from the list will ease certain economic sanctions on the island, but the broader US embargo on Cuba will remain in place because only Congress can end it. Iran, Sudan and Syria remain on the list.

Some experts said US banks would remain cautious for now. “Banks are certainly watching for further developments, but the Cuban government has a lot more steps to take until the industry can take action,” said Rob Rowe, vice president of the American Bankers Association.

The two countries have made headway toward an agreement on embassies. A US official expressed optimism but added, “We‘re still not quite there yet.” Among the unresolved issues is a US demand for freedom of movement for its diplomats.

Cuba’s human rights record still draws criticism from Washington, and Havana has shown little if any sign of political opening in the one-party system.

“We will continue to have differences with the Cuban government,” the White House said.

Geoff Thale of the Washington Office on Latin America, a private group that promotes democracy in the hemisphere, said: “Taking Cuba off the list of terrorist states is a sensible, and long-overdue step.”

Cuba was added to the list at the height of the Cold War when it was aiding leftist insurgencies such as the Farc rebels in Colombia. The most recent state department report in 2013 also accused Havana of providing safe haven to the armed Basque separatist group ETA, which is now inactive and last year pledged to disarm.

Cuba is now hosting peace talks between the Colombian government and the Farc.