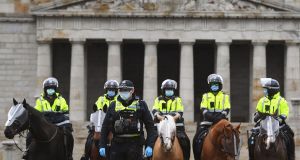 Police stand guard in front of the Shrine of Remembrance during an anti-lockdown rally in Melbourne on Saturday as the city continues to enforce strict lockdown measure to battle a second wave of Covid-19 coronavirus infections. Photograph: William West/ AFP/Getty

Saturday marked the fifth consecutive day that Indonesia registered daily infections of more than 3,000, bringing the total number of cases to 214,746.

Total Covid-19 deaths rose to 8,650, the highest in Southeast Asia.

Germany’s daily cases fell, while the infection rate rose to the critical threshold of one. There were 1,586 new cases in the 24 hours through Saturday morning, taking the total to 259,735, according to data from Johns Hopkins University. That’s slightly less than Friday’s increase of 1,716. At the peak of the pandemic in the spring, Germany registered almost 7,000 new infections.

Coronavirus is now spreading rapidly again across the UK for the first time since March, prompting ministers to urge the public to limit social activities.

Government figures put the “R” rate – the reproduction number that shows how fast the virus multiplies -– between 1.0 and 1.2, driven by a surge in cases among younger people. The virus is spreading exponentially when R is above 1.

Russia reported 5,488 new coronavirus cases on Saturday, bringing the tally to 1,057,362, the fourth largest in the world. Authorities said 119 people had died in the past 24 hours, pushing official total fatalities to 18,484.

The picture is mixed in Asia. India, the latest epicentre of the pandemic, reported 97,570 new cases, another daily global record, while deaths surpassed 1,000 for an 11th consecutive day.

The epidemic is surging across the South Asian nation at a record pace, as it moves beyond the cities to the country’s vast hinterlands. India now has the world’s second-largest number of infections after the US, with a total of 4.66 million. India also has the highest death toll after US and Brazil, with fatalities surpassing 77,000.

Japan is preparing to relax restrictions on attendance numbers for events including professional sports games, as the recent wave of infections subsides and the government seeks to further open the economy.

The Australian state of Victoria reported another drop in cases and deaths from the coronavirus in the past 24 hours as the regional government sticks by one of the world’s most stringent lock-downs.

The Victoria State Government recorded 37 new cases and six deaths from Friday across the country’s second-most populous state, down from 43 new cases and nine deaths the day before, the department of Health and Human Services announced on Twitter Saturday.

US cases rose 0.8 per cent, above the 0.6 per cent average daily increase of the previous week.

France’s prime minister has warned of a “clear degradation” with more than 9,000 cases reported for a second day.

Hungary reported a record 916 additional cases Saturday, bringing the total so far to 11,825. Two people died, raising that tally to 633. There are 282 coronavirus patients in hospital.

Prime minister Viktor Orban reiterated in a Facebook video Saturday that Hungary has enough capacity in its hospitals to deal with the wave of infections and that his priority is to keep the economy functioning. At the same time he again vowed stronger penalties for those breaking social distancing rules.

The Czech Republic, one of Europe’s most successful in containing the initial outbreak, posted another record in new cases on Friday, reaching 1,447 and bringing the total number of people with Covid-19 to 12,260.

The number of hospitalised patients remains relatively low at 264, according to the country’s Health Ministry.

Switzerland has become the latest European country to tighten entry restrictions for people travelling from the Czech Republic, requiring a 10-day quarantine upon arrival. The Czech ratio of new coronavirus cases per 100,000 people was about six times higher than in neighbouring Germany in the past seven days.

The worsening situation has prompted authorities to order citizens to wear face masks in all public indoor spaces this week, after relatively relaxed social-distancing measures during summer holiday season.

In Brazil. president Jair Bolsonaro suggested the country is beating the pandemic as the country added 43,718 cases, the third consecutive daily increase but fewer than the previous week’s high. Another 874 virus-related deaths pushed the total to more than 130,000, according to government data.

“We’ve practically overcome the pandemic,” Mr Bolsonaro said at a public event on Friday. He cited government aid programmes for public health and the economy.

Israel will enter a second coronavirus lockdown, becoming the only developed country to shut down again nationwide after a botched reopening of the economy sent infections soaring.

The Philippines’ health ministry on Saturday reported 186 more deaths related to the novel coronavirus, a new daily record and the highest single-day fatality rate recorded so far in Southeast Asia.

In a bulletin, the ministry said total deaths have increased to 4,292, while confirmed cases rose by 4,935 to 257,863. The Philippines has the most Covid-19 infections in the region.– Bloomberg and Reuters