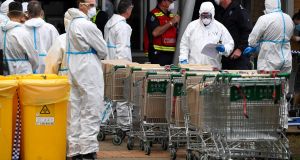 Members of the Melbourne Fire Brigade (MFB) prepare to take food parcels to residents in a locked down public housing estate in Melbourne. Photograph: William West/AFP via Getty

Melbourne began a six-week lockdown on Thursday following a spike in new coronavirus cases, as states around the country tightened internal borders to prevent a second wave sweeping the country.

Australia has avoided the high casualty numbers of other countries to the Covid-19 pandemic, which has killed 544,055 people globally, but an outbreak in Australia’s second most populous city prompted the state of Victoria to impose “self isolate” orders for the city’s estimated five million.

Victoria on Thursday reported 165 new infections have been detected in the last 24 hours, an increase on the previous day’s 134 cases.

Other states and territories have recorded few or zero cases in recent weeks and are continuing to reopen their economies, but Australian prime minister Scott Morrison told residents not to become complacent.

“We must continue to follow those social distancing protocols all around Australia, even in states or territories where the number of cases is effectively zero,” Mr Morrison told reporters in Canberra.

The northern state of Queensland said it would ban non-residents arriving from Victoria. It will open its borders to people from other states and territories on Friday.

Even people travelling from Victoria who were willing to pay for the mandatory 14-day hotel quarantine would be banned, the Queensland government said.

“They are making the decision that that two weeks and that cost is worth it to get out of Victoria,” deputy premier Stephen Miles said in a televised news conference.

“We don’t want that to continue,” he added.

It came as the number of cases worldwide passed 12 million, according to Johns Hopkins University.

All residents and visitors in Catalonia must wear face masks in public at all times, becoming the first Spanish region to toughen a national directive mandating their use when in close proximity to others.

The order was announced by regional leader Quim Torra four days after more than 200,000 people in the Segria area were placed under a local lockdown following a series of coronavirus outbreaks there.

“Masks will be mandatory all over Catalonia, not just in the Segria region... I think it’s an important measure,” Torra told the regional parliament. “We will distribute protective equipment.”

Another Spanish region took a similar decision shortly afterwards. Authorities in the Basque Country made masks mandatory regardless of the distance between people in the small town of Ordizia, where another cluster of nearly 50 cases has been detected, said the region’s health counsellor.

Spanish authorities last month made wearing masks compulsory indoors and outdoors in all circumstances in which 1.5 metres (5ft) of social distancing could not be maintained, and until a coronavirus cure or vaccine is found.

The tougher measure aims to stave off a relaxation in attitudes towards the virus observed among some citizens, officials said.

Masks will be mandatory in Catalonia for people above six years old outdoors and in any indoors space open to the public regardless of the physical distance between people, regional government spokeswoman Meritxell Budo told a press briefing.

Breaking this obligation will result in a €100 fine, she added.

The pandemic has hit Spain harder than most other European countries, causing more than 28,000 deaths and close to 270,000 infections, according to official data.

In Italy, also badly affected, the same strict mask-wearing rules are in effect until July 14th in regional Covid-19 epicentre Lombardy. Elsewhere in the country, wearing masks is not obligatory outside for those who can keep a safe distance from others.

India has reported nearly 25,000 new coronavirus infections as the disease continues to spread through the nation of nearly 1.4 billion people.

The virus is showing no signs of slowing in the worst-affected countries — the United States, Brazil and India.

The three nations account for more than 60 per cent of new cases, according to recent tallies from Johns Hopkins University.

In India, where the death toll has risen above 21,000, research by the Institute of Mathematical Sciences in Chennai shows that the reproduction rate of the virus ticked up in the first week of July to about 1.2 after it had steadily fallen from a peak of 1.8 in March.

The rate needs to be below one for new cases to start falling. Health experts say the true extent of the virus’s spread in India is unknown and that the country must test more given its enormous population.

The US reported nearly 59,000 new daily cases, just short of the record 60,000 cases set a day earlier, as President Donald Trump insisted that schools reopen in the autumn.

The virus has also been spreading rapidly in South Africa, which reported nearly 9,000 new cases in its latest daily update.

A provincial health official said 1.5 million graves are being prepared and it is the public’s responsibility “to make sure that we don’t get there”.

In the US, the number of confirmed cases has passed 3 million — meaning nearly one in every 100 people has been confirmed as infected — and the number of deaths is more than 132,000.

But Mr Trump remains determined to reopen America’s schools despite worries about the virus, and on Wednesday threatened to hold back federal money if school districts do not bring their students back in the autumn.

He complained that his own public health officials’ safety guidelines are impractical and too expensive.

Tokyo reported more than 220 coronavirus cases on Thursday, a record for a single day, even as officials continued to assert that a state of emergency is not necessary.

Tokyo governor Yuriko Koike said that increased testing had led to the surge, with authorities encouraging night-time businesses such as host and hostess bars to voluntarily test their staff.

Nonetheless, while small in comparison to some global cities, the number came as a shock after the figure had dropped below 100 on Wednesday for the first time in a week.

Officials have argued that the recent spike in cases is different from back in April, as the bulk of the infections are from those in their 20s and 30s who are less likely to fall severely ill.

Police officers will patrol New Zealand’s quarantine hotels around-the-clock after a number of people – including a man who tested positive for coronavirus – escaped the managed isolation facilities.

In two separate incidents in Auckland hotels guests in isolation left their quarantine hotels, with one woman escaping over a hedge, and another man over a small fence.

The 32-year-old man – who was away for 70 minutes and visited a busy inner-city supermarket – tested positive for Covid-19. He has since been charged under new public health legislation. He faces a large fine or six months in prison.

Government minister Megan Woods said on Thursday “the abscondees are a new phenomenon” and that their carelessness put the health of the whole country at risk. New Zealand has in effect eliminated the virus after a six-week lockdown, with ongoing tight border controls.

New arrivals in the country – the majority of whom are New Zealand citizens – have reported growing hostility from New Zealanders, some of whom feel the country’s Covid-free status was being jeopardised.

There are 5,648 people in managed isolation and quarantine, and on Thursday a further three new arrivals tested positive for Covid-19. – Agencies