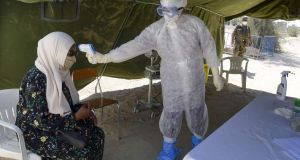 A nurse checks a woman’s temperature before a Covid-19 test at a military hospital in the town of El-Hamma, in Tunisia’s southwestern Gabes governorate on on Wednesday, as cases of novel coronavirus infections surge there. Photograph: Fethi Belaid/AFP via Getty

Covid-19 cases surpassed 24 million worldwide with India seeing a record spike and South Korea, Italy and France reporting the most new daily infections in months. A Reuters tally indicates 825,861 have died from the virus.

Abbott Laboratories surged after its 15-minute test was granted emergency clearance in the US.

Leaders of Europe’s major economies are mostly ruling out new broad movement restrictions as they try to support economic recoveries.

Japan’s most recent and largest wave of infections is showing signs of subsiding, despite a lack of heavy intervention from the government. In the US, applications for state unemployment benefits decreased last week.

Italy reported 1,411 new cases Thursday, in line with the previous day but still the most since May 6th. A record 94,024 tests were performed as summer vacationers returned rom countries including Spain and Greece.

The Lazio region around Rome is offering free tests at ports and airports to anyone coming back from the popular destination of Sardinia, where some clusters at nightclubs were reported.

Patients in intensive-care units fell by two to 67, while most new hospitalised patients, at least in Lombardy, have been admitted for other issues than Covid-19 symptoms like respiratory problems or pneumonia.

Chancellor Angela Merkel called on Germans to refrain from traveling to areas suffering from severe outbreaks of the coronavirus.

People visiting virus-hit areas risk losing income for the time they’re in quarantine, the German leader said Thursday after holding talks with state leaders to address the latest increase in infections. Travellers returning from high-risk areas will have to enter a 14-day quarantine, which can be ended if a negative test is submitted after five days.

“The federal and state governments urge all those returning from travel to comply with the quarantine obligations and thus also your responsibility toward fellow citizens,” Dr Merkel said. “We call for that wherever possible to avoid traveling to risk areas.”

Currently, those areas include most of Spain as well as parts of France and Croatia, among other countries.

Germany recorded 1,431 new cases in the 24 hours through Thursday morning, little changed from the previous day’s figure of 1,457, according to data from Johns Hopkins University. That brought the total to 239,010. The reproduction factor – the average number of people infected by one person with the virus – fell to 0.85 on Wednesday from 0.90 the previous day.

A spat has broken out between senior officials in Dr Merkel’s conservative bloc over coronavirus rules for travellers arriving in Germany from areas designated as risky.

Health Minister Jens Spahn announced this week that arrivals from risk areas will have to enter a 14-day quarantine, which can be ended after five days if a negative test result is provided. Due to a lack of capacity, a requirement for people to be tested on arrival will be scrapped when the changes take effect some time after the middle of next month.

Florida reported 611,991 Covid-19 cases on Thursday, up 0.5 per cent from a day earlier, compared with an average increase of 0.6 per cent in the previous seven days. The seven-day rolling case total was 23,389, the lowest since June 22, according to the health department report, which includes data through Wednesday. The new daily rate of people testing positive for the first time rose to 6.4 per cent for Wednesday, from 5.7 per cent on Tuesday.

Deaths among Florida residents reached 10,868, an increase of 135, or 1.3 per cent, and the seven-day rolling total was 819. By that measure, it has now been under 1,000 for the past six reports, after peaking this month at nearly 1,300. Deaths often trail infections by weeks, and generally take even longer to be reflected in the data.

A 15-minute Covid test from Abbott Laboratories that will be priced at just $5 won emergency authorisation for use in the US, a breakthrough that could ease the bottleneck that has crimped much of the nation’s testing capacity.

The product, dubbed BinaxNOW, works without relying on laboratory equipment at a time when labs can take as long as two weeks to produce results. It uses a nasal swab and a small reactive card, and it can be administered by a range of health-care workers, including pharmacists, at almost any location.

Abbott will start shipping the test within two weeks and intends to manufacture 50 million tests a month by the end of October.

Anthony Fauci, the top US top infectious disease doctor, told CNN that he is concerned that the CDC’s new coronavirus testing guidelines will make people believe “that asymptomatic spread is not of great concern, when in fact it is”.

Mr Fauci said in the CNN interview that he was in surgery when the new testing recommendations were discussed.

Defending the vaccine as safe and effective, Russian president Vladimir Putin said his daughter didn’t consult with him before taking the experimental inoculation against Covid-19 this summer.

“She’s an adult. She just told me that she’d made the decision,” Mr Putin told state television, adding that she’s formed antibodies against the virus following the shots. He defended Russia’s approval process for the vaccine as “in line with international practice,” noting that it was conditional on further testing.

The UK faces a moment of renewed danger as the winding down of support measures threatens to coincide with a potential winter resurgence of the virus, said Adam Marshall, director general of the British Chamber of Commerce.

In a separate warning, the Chartered Institute of Procurement and Supply said many UK companies are not preparing for Brexit because the pandemic has depleted their cash reserves.

UK health secretary Matt Hancock said the government will pay workers on low incomes £13 (€14.50) a day if they are self-isolating during the pandemic.

The payments will begin on a trial basis from September 1st in Blackburn and areas of northwest England that currently have additional social distancing-rules in place to contain local outbreaks, the Department for Health said in a statement

France is ready to institute a new national lockdown as a last resort as Europe grapples with how to contain the resurgent coronavirus. Plans to restrict movement are ready, but the country will do everything possible to avoid measures that clobbered the economy in the second quarter, the country’s prime minister Jean Castex said on Thursday.

“The epidemic is gaining ground, and we need to intervene now,” Castex said, rejecting the need for broad restrictions. “This doesn’t mean the situation is as serious as it was” earlier this year.

Indonesia reported a record surge in new cases on Thursday, bringing the total to 162,884, official data showed. New infections jumped by 2,719 in 24 hours while the death toll rose by 70 to 7,064.

Japan’s most recent and largest wave of infections is showing signs of subsiding, despite a lack of heavy intervention from the government to bring it under control.

After peaking at the start of August, the country is on track for a sixth consecutive day where new cases are below 1,000. The seven-day average of cases is falling in almost every hotspot, including in Tokyo where the 250 cases reported Thursday are about half of the peak level found earlier this month. The test positivity rate in the capital has been below 5 per cent for three days.

South Korea had 441 more cases confirmed in the past 24 hours, the biggest gain since early March, according to data from the Korea Centers for Disease Control and Prevention.

India had its biggest single-day jump in new cases on Thursday, with 75,760 infections confirmed, as the disease’s spread continues to accelerate through the world’s second most populous country. With 3.3 million cases in total, India currently has the world’s third largest outbreak, though its epidemic is now growing faster than both the US and Brazil’s, the countries that have the most and second-most cases.

Indian infections have continued to accelerate as the disease spreads out of its globally connected cities which were first hit, and into the country’s vast hinterland where most of the population lives. – Bloomberg/Reuters