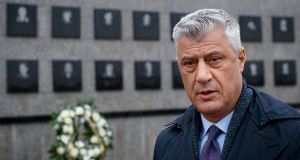 Kosovo’s president Hashim Thaci has been accused of ‘a range of crimes against humanity and war crimes, including murder, enforced disappearance of persons, persecution, and torture’. Photograph: EPA

US plans for a Kosovo-Serbia summit at the White House on Saturday have collapsed after Kosovo’s prime minister Avdullah Hoti said he was needed in his homeland to handle the fallout from war crimes allegations made against its president, Hashim Thaci.

Mr Thaci was travelling to Washington on Wednesday afternoon when special prosecutors based in The Hague formally indicted him and associates over “nearly 100 murders” and other grave crimes allegedly committed during and after a 1998-9 war between Kosovo’s ethnic Albanian rebels and Serbian forces.

“Due to the new developments . . . I have to return to my country to deal with the situation,” Mr Hoti said on Thursday.

The White House envoy for Kosovo-Serbia dialogue, Richard Grenell – who had announced that Mr Hoti would take Mr Thaci’s place at the negotiating table opposite Serbian president Aleksandar Vucic – wrote on Twitter that “we understand your decision and we look forward to re-scheduling the meeting soon”.

The indictment filed with the Kosovo Specialist Chambers in The Hague accuses Mr Thaci, former Kosovo parliamentary speaker Kadri Veseli and unnamed other suspects of “a range of crimes against humanity and war crimes, including murder, enforced disappearance of persons, persecution, and torture”.

The suspects are accused of being “criminally responsible for nearly 100 murders. The crimes alleged in the indictment involve hundreds of known victims of Kosovo Albanian, Serb, Roma, and other ethnicities and include political opponents,” the prosecutors said in a statement.

A judge at the special court – which operates under Kosovo law but has EU funding and international staff – is now deciding whether to confirm the charges.

The prosecutors said they had made the indictment public because of “repeated efforts” by Mr Thaci and Mr Veseli “to obstruct and undermine the work” of the court.

Mr Thaci has previously denied committing any crimes during the war, and on Thursday he changed the profile picture on his Facebook page to the symbol of the separatist Kosovo Liberation Army, for which he was the political leader.

Mr Veseli dismissed the allegations and other prominent politicians in Kosovo and neighbouring Albania denounced the special court, which many Kosovars accuse of wrongly targeting freedom fighters in a conflict that claimed about 13,000 lives and displaced more than one million people – the vast majority of them ethnic Albanians.

Mr Hoti was more measured, however, in comments made while visiting Brussels on Thursday for talks with top EU officials.

“Issues related to justice, such as yesterday’s decision, I believe should not be commented on, but I believe they should be fully respected. I believe Kosovo now has the institutional prudence to deal with and overcome any situation,” he said.

“Only through dialogue we can solve our disputes with Serbia, resulting on mutual recognition and normalisation of relations . . . My government will fully respect its international obligations.”

Mr Vucic is scheduled to hold meetings in Brussels on Friday. Serbia still rejects Kosovo’s 2008 independence declaration, but the EU says neither can join the bloc without resolving the dispute. EU-brokered talks on the issue are expected to resume next month after breaking down in late 2018.