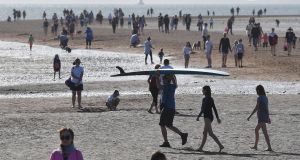 Global coronavirus deaths rose past a quarter of a million on Monday after infections topped 3.5 million, a Reuters tally of official government data showed, even as several countries began easing lockdowns designed to contain the pandemic.

North America and European countries accounted for most of the new deaths and cases reported in recent days, but numbers were rising from smaller bases in Latin America, Africa and Russia.

That exceeds the estimated 140,000 deaths worldwide from measles in 2018, and compares with around 3 million to 5 million cases of severe illness caused each year by seasonal influenza, according to the World Health Organisation (WHO).

Health experts are watching closely as several countries tentatively ease restrictions on movement in a bid to revive global economies, amid fears of recurring infections.

In the United States, which has the world’s highest total of infections and deaths, at almost 1.2 million and 68,000 respectively, at least half of the 51 states are moving forward with plans to reopen stricken businesses.

Italy, among the world’s hardest-hit countries, allowed about 4.5 million people to return to work on Monday after nearly two months at home.

China reported one new case of coronavirus on Tuesday and no deaths, marking three weeks since it recorded a Covid-19 fatality.

The National Health Commission said 395 people remained under treatment in hospital, while 949 were under isolation and observation for suspected cases or after testing positive despite showing no symptoms.

The latest figures come as China strikes back against accusations from US secretary of state Mike Pompeo and others that the pandemic may have originated in a lab in the central Chinese city of Wuhan where it was first detected late last year.

The WHO has backed up China’s refutations and most experts believe the virus developed naturally among bats and was transmitted to humans via an intermediary animal, most likely the armadillo-like pangolin that is sold for human consumption in wet markets, including the one in Wuhan linked to the pandemic’s origin.

China has reported 4,633 deaths from the virus among 82,881 cases, but strict travel restrictions, testing, quarantining and case tracing policies appear to have stemmed the virus as warm weather arrives in much of the country.

The number continues a downward trend as the country restarts professional sports and prepares to reopen schools.

After reporting around 500 new cases a day in early March, infections have slowed over the past month amid tightened border controls and waning transmissions in the worst-hit city of Daegu, which reported zero new cases on Tuesday.

Health authorities still raised concerns over a broader “quiet spread” and plan antibody tests to learn how widespread the virus is.

Amid the slowing caseload, officials have relaxed social distancing guidelines and decided to reopen schools in phased steps, starting on May 13th. South Korea’s professional baseball league began its new season without fans in the stands on Tuesday, while the pro football league will kick off under similar conditions on Friday.

The new coronavirus pandemic has brought back something unseen in Iran since its 1979 Islamic Revolution: a drive-in cinema.

Once decried by revolutionaries for allowing too much privacy for unmarried young couples, a drive-in cinema now operates from a car park right under Tehran’s famous Milad tower, showing a film in line with the views of hardliners.

Workers spray disinfectants on cars that line up each night after customers buy tickets online for what is called the Cinema Machine in Farsi. They tune into the film’s audio via an FM station on their car radios.

With stadiums shut and cinemas closed, this car park screening is the only film being shown in a communal setting amid the virus outbreak in Iran, one of the world’s worst. Iran has reported more than 98,600 cases with over 6,200 deaths, though international and local experts acknowledge the toll is likely to be far higher.

The booziest part of Australia is preparing to reopen pubs this month.

Businesses have been asked to prepare Covid-19 safety plans beginning on Tuesday ahead of several types of venues reopening in the Northern Territory on May 15th, including pubs, restaurants and cafes.

The Northern Territory, also known in Australia as the Top End, has the highest rate of alcohol consumption per capita of any Australian state or territory and is on track to become the first to reopen bars following a national lockdown that began on March 23rd.

But alcohol will only be allowed to be served with food, and patrons will not be able to linger for more than two hours.

The Northern Territory has a population of only 250,000 people in an area twice the size of France. It has recorded 30 cases of Covid-19 and no fatalities.-AP/Reuters