Concern as left-wing group to protest at Montreal parade 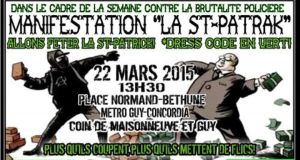 A screengrab from the COBP website shows the poster for the protest which reads ‘St Patrak Demonstration’, which is a play on the French word matraque, or police baton.

A left-wing group, set up to oppose police brutality, is planning a demonstration at the Montreal St Patrick’s Day parade in Quebec, Canada on March 22nd.

A statement on the COBP [Collective Opposed to Police Brutality] website says the protest is designed to highlight the fact that they “no longer have the right to protest in Montreal”.

Their website claims their overall aim is to “report harassment, violence, intimidation, arrests and abuse of police powers and inform people about their rights against the police”.

In its statement COBP said: “people who are going to the parade have nothing to fear from us”.

The Montreal Gazette reports that the group is known for demonstrations which “habitually devolve into vandalism and mass arrests”.

Kevin Murphy, a spokesperson for the United Irish Societies of Montreal, who organise the parade, told The Irish Times “we were very disappointed to learn that this group is planning a demonstration at the same time and near our parade. We are a family event celebrating Montreal.

“We hope this group reconsiders its plans and chooses to celebrate with the rest of Montreal instead of demonstrating.”

The heading of the COBP poster for the event, which features illustrated masked men throwing bricks, reads ‘St Patrak Demonstration’ and is a play on the French word matraque, or police baton.