Analysis: Cuban leader seen as embodiment of resistance to dictators – and US power 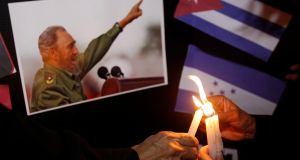 People place candles beside a picture of Fidel Castro, as part of a tribute, in Tegucigalpa, Honduras, following the announcement of the Cuban leader’s death. Photograph: Jorge Cabrera/Reuters 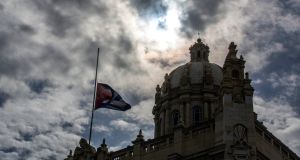 The Cuban flag flies at half-mast outside the Museum of the Revolution. Photograph: AP 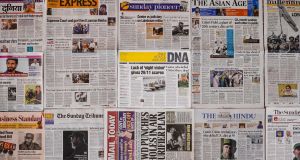 With the death on Friday of former Cuban leader Fidel Castro at the age of 90 Latin America has lost its most important political figure of the 20th century.

From his Caribbean island base he exercised an influence over the region’s political, social and cultural development during the second half of the last century that had no parallel among any of his contemporaries and was out of all proportion to Cuba’s size.

With his mania for placing his revolution, and therefore himself, at the centre of world events, Castro ensured Cuba played a role on the international stage that no other Latin leader could match.

In October 1962 he was a central player in the hottest episode of the Cold War between the West and the Soviet Bloc as the world flirted with Armageddon during the Cuban Missile Crisis.

And even as his revolution stagnated at home, Castro was unafraid to send an expeditionary force thousands of miles across the Atlantic in 1975 to beat off an invasion by the apartheid regime in South Africa of newly independent Angola, saving its communist regime in an act of revolutionary solidarity.

In part Castro’s outsized influence was due to sheer longevity. He ruled his country for 49 years and 55 days. Political eras came and went but even as he grew old and frail Fidel - as all but his bitterest enemies referred to him - seemed eternal. His doggedness was part of his myth among Latin Americans, supposedly surviving 638 assassination attempts between 1958 and 2000, the last by a former CIA agent during a summit in Panama.

Even before he came to symbolise Latin communism, Castro was adopted across the region as the embodiment of resistance: not only against the Cuban dictator Fulgencio Batista but also nefarious US influence in Latin America, extremely comfortable as it was in exercising control through thuggish clients such as the one El Comandante chased out of Havana on New Year’s Day 1959.

In the early days of the revolution, he received rapturous welcomes on visits across the region, not just from ordinary people but leaders as well. Several months after seizing power he made a symbolic visit to the future Brazilian city of Brasília, then being built on the empty savannah.

The young Cuban leader at the site of the new modernist capital of Latin America’s biggest country symbolised a moment of intense Latin optimism about a brighter future.

The declaration in April 1961 that Castro’s Revolution was socialist, and its deepening alliance with the USSR, marked a clear break with this early enthusiasm.

It was to have profound repercussions across Latin America as it helped to frame a brutal ideological struggle in the coming decades between left and right that would consume a generation of leftists.

Revealing the Cuban regime’s communist nature drew many idealists into supporting the Marxist guerrilla movements that Havana began to sponsor across the region in the hope of repeating Batista’s overthrow elsewhere.

Nowhere did they succeed until the Sandinistas took power in Nicaragua in 1979. The toll was terrible in lives lost and politically the traditional left was sidelined for a generation.

The latter found itself caught between a Cuban-inspired vanguard and a ferocious counter-revolution sponsored by Washington. This resulted in the overthrow of democratic but ideologically unsound presidents such as João Goulart in Brazil and Salvador Allende in Chile and the installation of bloody military dictatorships across the region one of which, backed by US President Ronald Reagan, committed genocide in Guatemala.

The ending of the Cold War in 1989 and the subsequent disintegration of the Soviet Union seemed to mark the end of Cuba’s disproportionate influence on Latin American history.

The cutting off of a $4 billion-a year-subsidy from Moscow provoked the collapse of its economy and there was a rush by regional analysts eager to write the Havana regime’s obituary.

As the right-wing dictatorships across Latin America gave way to democratically elected governments, Castro was once again welcome in regional capitals but his communist island seemed increasingly an anachronism, its one party rule an embarrassment amidst the new democratic dispensation.

Brazil’s then president Fernando Henrique Cardoso recounts how at dinner for heads of state during a summit in Havana in 1999 one visiting leader rose to his feet and, pounding the table, asked: “Damn it, Fidel! What are you going to do about this lousy, piece-of-shit island of yours?...We’re sick of apologising for you all the time, Fidel.”

After several other leaders made similar statements Castro sheepishly

replied: “Well, you know all of you have much more power that I do. I hardly know what is going on in Cuba anymore.”

But if he seemed defeated then Castro was not yet done with his leadership role in Latin America. Many of those attending the 1999 dinner had followed the neo-liberal economic policies of the Washington Consensus.

But democracy allied to capitalism did not resolve the region’s huge social problems and in many countries only aggravated them.

As a result around the millennium the neo-liberal regimes were swept away by a new generation of leftists, who this time took power through the ballot box. Many of these new leaders idolised Castro, who was frequently the star at their swearing-in ceremonies and Havana became once again a regular stopping off point on the Latin diplomatic circuit.

Even so there was no effort to replicate the Cuban model which Castro himself admitted in 2010 no longer worked. But the admiration of a new generation of acolytes did allow him to grow close to Hugo Chávez in Venezuela to the great financial benefit of Cuba. Subsidised Venezuela oil pulled its economy out of its post-Soviet slump.

But the current crisis within chavismo leaves the communist island vulnerable once again to the loss of a foreign patron even as its rickety economy produces ever greater levels of inequality and its famed social services are hollowed out.

Nevertheless there has been an elegiac tone across the region at the news of Castro’s death, not just for the passing of its one indisputable Great Man of the last century but for the dream of his tropical utopia that once enchanted so many Latin Americans but ended in another Caribbean dictatorship.

Castro will not care. “Condemn me, it does not matter. History will absolve me,” he famously told his 1953 trial for the attack on the Moncada barracks.

And with Latin America still home to so many of the world’s most violent and unequal societies who is to say that its future generations, at a greater distance from Castro’s failings, will not once again be drawn to the shining ideal his revolution once - however briefly - seemed to realise?