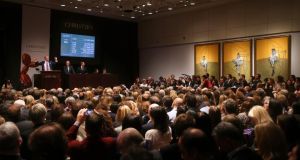 Francis Bacon’s 1969 triptych, “Three Studies of Lucian Freud,” on display as it is auctioned at Christie’s in New York, November 12th, 2013. The painting sold for $142.4 million, described as the highest price ever paid for an artwork at auction. Photograph: Chang W. Lee/The New York Times.

A painting by Dublin-born artist Francis Bacon sold for $142.4 million (€105.3 million) at auction in New York last night – the most valuable work of art ever sold at auction.

Three Studies of Lucian Freud was sold to an anonymous telephone bidder after six minutes of fierce bidding at Christie’s auction of Post-War and Contemporary Art in Manhattan.

William Acquavella, the New York dealer, bought the painting, presumably on behalf of an unidentified client, the winner out of seven superrich bidders.

It also broke the previous record for the artist at auction set at the peak of the market in May 2008, when Sotheby’s sold a triptych from 1976 to the Russian oligarch Roman Abramovich for $86.2 million.

When the bidding finally stopped, after more than 10 fraught minutes, the capacity crowd in the salesroom burst into applause. Two disappointed bidders could be seen leaving the room.

“I went to $101 million but it hardly mattered,” said Larry Gagosian, the super-dealer who was trying to buy the painting on behalf of a client. Another contender was Hong Gyu Shin, the director of the Shin Gallery on Grand Street in New York, who said he was bidding for himself.

There was applause in the saleroom when the hammer came down at $127 million. The buyer’s premium charged by the auctioneer took the final price up to $142.4 million.

The price easily beat the previous world record price for a painting at auction – the €119.9 million ($90.6 million) paid for one of four versions of The Scream by Norwegian artist Edvard Munch at Sotheby’s, New York, in May last year.

Three Studies of Lucian Freud, is, like many of Bacon’s most famous paintings, a triptych – a painting on three separate panels designed to be hung together.

Each panel is framed separately.

The life-size painting, dating from 1969, depicts Lucian Freud – a friend and fellow-artist of Bacon’s – sitting on a wooden chair in various poses.

Christie’s described it as one of the most important paintings by the artist, “uniting two of the 20th Century’s greatest figurative painters at the apex of their relationship”.

The painting was first exhibited at Bacon’s retrospective at the Grand Palais, Paris, in the early 1970s and has never appeared at auction before. It was sold by an unnamed European collector.

Bacon painted a total of three triptychs of Lucian Freud. Of the other two, one is in a private collection and the other was permanently dismantled with each of the three panels now in separate ownership.

Many of Bacon’s paintings are in museums but private collectors are believed to include Russian oligarch Roman Abramovich, the American hedge-fund billionaire Steve Cohen; Sheikha Al Mayassa, daughter of the Emir of Qatar; and an unnamed “Irish billionaire” believed to have bought one at auction in London in 2008 for £17 million.

Bacon was born in Lower Baggot Street Dublin in 1909 and grew up in Co Kildare. He moved to England as a young man and became one of London’s most famous artists during the 1960s.

He died in 1992 and his South Kensington studio was later donated to Dublin’s Hugh Lane Gallery, where it has been reconstructed.

Lucian Freud, who died in 2011, was a German-born British artist and a grandson of the Viennese psychoanalyst Sigmund Freud.

Of the 69 works on offer, only six failed to sell. Ten world record prices were achieved for artists who, besides Bacon, included Christopher Wool, Ad Reinhardt, Donald Judd and Willem de Kooning.

Christie’s said it attracted bidders from 42 countries worldwide. The sale established 10 new world auction records, selling 11 lots for over $20 million, 3 works for over $50 million, 16 for over $10 million and 56 for over $1 million.

Among other highlights in the sale were a polished stainless-steel sculpture; ‘Balloon Dog (Orange) by Jeff Koons made $58.5 million – a new world auction record for a living artist.

A painting of a Coca-Cola bottle by Andy Warhol titled ‘Coca Cola 3’ which Christie’s said “was one of the artist’s earliest works that defined the Pop generation’ made $57.2 million.

After the sale, Jussi Pylkkanen, chairman of Christie’s Europe and the evening’s auctioneer, said, “There were more players from the new world than ever before. And more people spending over $20 million. “But,” he warned, in order to have such a successful sale, “You have to have the material.”