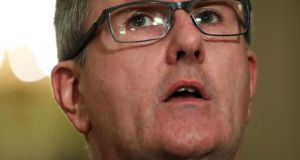 The North’s five main parties are to raise concerns about the United Kingdom’s new points-based immigration system with the British government amid fears the scheme could jeopardise the North’s economy.

Sinn Féin said the proposals were “unpopular, unworkable and a direct threat to the North’s economic viability”.

SDLP leader Colum Eastwood said the new rules represented a “fundamental threat to the North’s economy and the effective provision of public services”.

And DUP MP Jeffrey Donaldson said his party would ask the UK government to reduce the salary threshold for skilled migrant workers who wanted to come to Northern Ireland.

Under the new, points-based immigration system, unveiled by London on Wednesday, skilled migrants with a job offer must meet a minimum salary threshold of £25,600 (€30,630).

Mr Donaldson said a “key ask” would be “that we get some form of regional variation on the salary threshold to recognise the high dependence of Northern Ireland on the agrifood sector”.

He also said Northern Ireland’s border with the European Union “should be taken into account in considering the need for regional variations”.

The point-based immigration system will come into effect on January 1st, 2021.

It bars entry to the UK for unskilled workers and stipulates that skilled workers must be in receipt of a job offer from an approved employer sponsor that meets the minimum threshold. They must also be able to speak English.

The Alliance Party will pursue “a two-track approach of objecting to the forthcoming legislation in its entirety while seeking special mitigation for Northern Ireland”, said the party’s deputy leader, MP Stephen Farry.

Ulster Unionist MLA John Stewart said he was “very concerned what these proposals will do to the hospitality, retail and agricultural sectors” and said they could also “impact on the delivery of health provision and be an absolute disaster for the care sector in particular”.

He would, he said, raise these concerns with the North’s Secretary of State.

Business leaders in Northern Ireland warned on Wednesday that the new arrangements were a threat to the North’s economy and could lead to labour shortages.

They said they might also encourage some employers, particularly those in Border areas, to relocate to the Republic of Ireland, where it would be easier to recruit staff.

“These proposals fail to recognise that many people come to Northern Ireland without the privileges of wealth and higher education, yet make a huge contribution to the Northern Ireland economy and wider society,” he said.

“What we need instead are proposals which respect the basic human rights that are affected by the immigration system here, including rights of family life and people’s need for safety, security and stability.

“We can and must do better.”