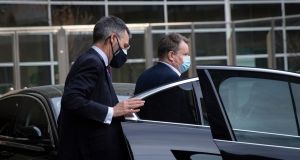 Negotiations between the European Union and United Kingdom stretched into Christmas week as haggling over hundreds of millions of euro in annual fishing became the final matter frustrating a deal.

Britain’s determination to claw back as much as possible of €650 million in fish caught in its waters by EU boats annually has met stiff opposition by member states keen to protect coastal towns.

Described by both sides as “very difficult”, the talks broke a deadline set by the European Parliament, which warned that it would refuse to ratify a deal by January 1st if it arrived any later than Sunday midnight.

Brussels and London both made a step towards the other, with Britain reducing its demand for the EU to cede 80 per cent of its annual catch to 60 per cent, with a phase-in period of three years, according to sources close to the talks.

After intense tic-tacking between member states over the weekend to thrash out what would be acceptable in the national capitals, the EU increased its offer to relinquish 18 per cent to 25 per cent, phased in over six years, The Irish Times understands.

The percentages shifted at different points over the weekend, and late on Sunday EU sources said they were awaiting a counter-offer from Britain, where Downing Street was said to be struggling to juggle both the talks and turmoil over Covid-19.

An EU diplomat dismissed the idea that Britain could sign “side deals” with neighbouring countries to ease the chaos that would ensue if no deal could be reached, a suggestion raised by British cabinet minister Michael Gove.

“London is hoping for mini deals, but unless London does a better bid on fish there won’t be any mini deals, only no deal,” the diplomat warned.

British negotiators have now been in Brussels for a week longer than planned after talks crashed through a previous deadline of last Sunday, when they were called back to the negotiating table from the Eurostar terminal on their way to London.

The pressure of Christmas is seen as likely to bring the talks to an imminent conclusion. Chief EU negotiator Michel Barnier said the negotiations were at a “crucial moment”.

“The EU remains committed to a fair, reciprocal and balanced agreement,” he wrote. “Both the EU and the UK must have the right to set their own laws and control their own waters. And we should both be able to act when our interests are at stake.

Meanwhile, an Irish fishing industry group has called on the Government to threaten to use its veto against a trade deal if the industry is not compensated sufficiently for ceding a disproportionate share of the EU catch that the negotiators are proposing to hand back to the UK to secure a wider agreement.

The Killybegs Fishermen’s Organisation has reacted with shock at a proposal made during the negotiations that would amount to the Irish fishing boats conceding €44 million out of the €160 million worth of the EU’s annual fish catch in UK waters in a bid Brussels tabled in the negotiations.

“If this deal is going to damage us so badly, then the Government should use the veto to get the compensation from the others,” said KFO chief executive Sean O’Donoghue.

“If it comes to it that this is the deal that is going down, then Ireland needs to - before they sign off on this - get the other member states to stump up for the unfair burden that we are carrying.”