May and Juncker agree ‘legally binding’ changes to NI backstop 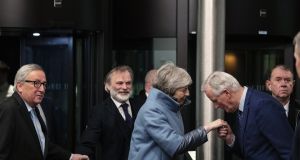 The British government claimed on Monday night it had won legally binding changes to the Northern Ireland backstop after the European Union agreed to two additions to the withdrawal agreement.

During late-night talks in Strasbourg, Theresa May and European Commission president Jean-Claude Juncker signed off on a joint interpretive instrument on the withdrawal agreement and a joint statement on the political declaration.

David Lidington, the prime minister’s de facto deputy, told the House of Commons the interpretive instrument has the same legal status as the withdrawal agreement. He said it provides confirmation the EU cannot try to trap the UK in the backstop indefinitely and that doing so would be a breach of the legally-binding commitments both sides have agreed.

“If – contrary to all expectations – the EU were to act with that intention, the UK could use this acceptance of what could constitute an explicit breach as the basis for a formal dispute, through independent arbitration, that such a breach had occurred – ultimately suspending the protocol if the EU continued to breach its obligations,” he said.

“On top of this, the joint instrument also reflects the United Kingdom’s and European Union’s commitment to work to replace the backstop with alternative arrangements by December 2020, setting out explicitly that these arrangements do not need to replicate the provisions of the backstop in any respect.”

In a joint press conference with Mrs May in Strasbourg on Monday night, Mr Juncker said the backstop was an insurance policy “no more, no less” and it was never intended to be used. He said the Taoiseach had told him he would support the deal, along with the rest of the European Council.

Mrs May said MPs had made clear legal changes were needed. “What we have secured is that the backstop cannot be indefinite,” she said.

Mr Juncker said that if MPs vote against the deal today, there would be no further negotiations on the withdrawal agreement or the backstop.

A joint statement issued by the EU and the UK promised “a specific negotiating track” would be established as part of the negotiations.

“This dedicated track will consider the use of all existing and emerging facilitative arrangements and technologies, with a view to assessing their potential to replace, in whole or in part, the backstop solutiMonon in the Protocol on Ireland/ Northern Ireland. That assessment will include an evaluation of their practicability and deliverability in the unique circumstances of Northern Ireland.”

MPs will vote today on the PM’s Brexit deal, which they rejected by 230 votes in January. DUP deputy leader Nigel Dodds, whose party’s support is regarded at Westminster as key to approving the deal, said he would analyse “very carefully” what emerges from Strasbourg.

In Dublin, the Cabinet met for 90 minutes on Monday night while the negotiations were under way and Taoiseach Leo Varadkar spoke by phone to Mr Juncker during the meeting. Cabinet sources said that the discussions centred around an agreed legal interpretation of the Withdrawal Agreement and the documents associated with it.

Mr Varadkar and his senior staff were due to travel to the US for the annual St Patrick’s Day series of events, but postponed their departure. It had been intended that Mr Varadkar would be in Washington DC today, ahead of the beginning of the official programme beginning tomorrow, to monitor Brexit votes in Westminster. The Taoiseach is due to meet US president Donald Trump tomorrow.

Mrs May flew to Strasbourg on Monday afternoon after negotiations with Brussels appeared to get back on track following a setback on Sunday.