Brexit negotiating teams convene for round one of trade talks 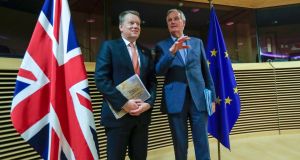 Negotiating teams for Britain and the European Union met for the first round of talks on the future relationship between the bloc and its former member in Brussels on Monday.

Chief negotiators Michel Barnier and David Frost held a roundtable meeting together with their teams of dozens of negotiators, opening the first of five rounds of talks due to take place by May that will alternate between Brussels and London.

On Tuesday and Wednesday, the talks will divide into 11 groups that will run concurrently, focusing on areas including trade in goods, services and the contested so-called level playing field.

Britain hopes to achieve a free-trade deal with the European Union that allows it trade easily with the world’s largest economic bloc. But the EU holds that easy access to its single market can come only with close alignment to its rules and standards, as otherwise UK companies would have an unfair advantage over those of the EU – something that London has ruled out.

Other sticking points include fishing rights: an economically puny but politically weighty issue, particularly for countries such as Denmark and France. Britain wants to preserve more of the catch in its territorial waters for its own fishing industry, ending the practice of shared fishing waters, but it relies on EU markets to sell much of its fish.

The first round of talks will conclude on Thursday with a meeting of all groups and a bilateral meeting between Barnier and Frost, at which they will take stock of progress made so far.

Britain has left the EU and is now in a transitional arrangement, continuing to observe the same norms as before until the end of this year. If no deal can be reached, Britain will begin automatically trading with the EU on World Trade Organisation default terms in January.

Both sides have said they are willing to walk away without a deal, even though this would entail economic damage, particularly for Britain and its closest neighbours including Ireland. Britain has said it will prepare for a no-deal scenario if it judges that insufficient progress has been made by June.

But whether or not a deal is struck, Britain has made clear that its ambitions are for a more distant relationship with the EU, even if that comes at an economic price.

“I am very concerned that there’s not sufficient planning in place presently,” said Hogan. “The last thing we want to see is a logistical nightmare for our exporters at our ports and airports through not being properly prepared.”