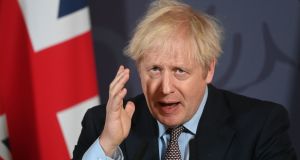 British prime minister Boris Johnson: ‘We will be able to set our own standards, to innovate in the way that we want.’ Photograph: PA

European Union member states have started reviewing the trade and co-operation deal agreed with Britain on Christmas Eve as MPs prepare for a return to Westminster next week to vote on it.

The deal is almost certain to be approved by both sides. Although the EU will have to apply it provisionally from January 1st pending approval from the European Parliament later next month.

British prime minister Boris Johnson can feel confident of winning a majority for the deal in the House of Commons after Labour leader Keir Starmer said his party would back it.

Welcoming the agreement in a press conference in Downing Street, Mr Johnson said it would protect British jobs while restoring sovereignty to Britain and honouring the outcome of the 2016 referendum.

“We will be able to set our own standards, to innovate in the way that we want, to originate new frameworks for the sectors in which this country leads the world, from biosciences to financial services, artificial intelligence and beyond. We will be able to decide how and where we are going to stimulate new jobs and new hope, with freeports and new green industrial zones,” he said.

The deal, which was finalised after nine months of sometimes turbulent negotiations, guarantees tariff-free, quota-free trade in goods between Britain and the EU.

Trusted trader schemes and self-verification systems will reduce the impact of a hard customs and regulatory border that will apply to all parts of the United Kingdom except Northern Ireland from January 1st.

“I’m immensely proud of the comprehensive package of capabilities we’ve agreed with the EU. It means both sides have effective tools to tackle serious crime and terrorism, protecting the public and bringing criminals to justice,” she said last night.

“But we will also seize this historic opportunity to make the UK safer and more secure through firmer and fairer border controls.”

Parting is such sweet sorrow

Quoting Shakespeare, she said “parting is such sweet sorrow” but promised that the EU and Britain would stand shoulder to shoulder to deliver on their common global goals.

“Of course, this whole debate has always been about sovereignty. But we should cut through the soundbites and ask ourselves what sovereignty actually means in the 21st century,” she said. “No deal in the world can change reality or gravity in today’s economy and today’s world. We are one of the giants.”

French president Emmanuel Macron, viewed in Britain as the most hardline European leader during the negotiations, also welcomed the deal.

“The unity and strength of Europe paid off,” he said. “The agreement with the United Kingdom is essential to protect our citizens, our fishermen, our producers. We will make sure that this is the case.”

MPs and peers will return to Westminster next Wednesday to debate and vote on legislation for the agreement in a single day.

A small number of diehard Conservative Brexiteers are expected to vote against it and some Labour MPs have signalled that they could defy their leader’s instruction to vote in favour of it.