São Paulo Letter: Both leaders see themselves as battling entrenched establishments that seek to thwart their goals 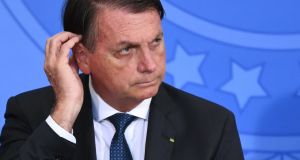 Jair Bolsonaro: one of the few issues his administration has worked hard on and with significant success is to make cheaper guns more accessible in Brazil. Photograph: Evaristo Sa/AFP via Getty Images

To the surprise of few Brazilians, their president Jair Bolsonaro declined to criticise Donald Trump for inciting a mob into attacking the US Capitol last week as part of his bid to overturn November’s election result. When supporters sought his opinion on the unfolding riot in Washington DC, he told them: “I followed everything today. You know I am linked with Trump, right? So you already know what my answer is.”

Instead, as the heads of other democracies recoiled in horror at the violence, Brazil’s far-right leader once again parroted his US counterpart’s baseless allegations that the election was stolen from him through massive voter fraud.

Another would-be authoritarian, Bolsonaro has always jumped at any opportunity to show fealty to a leader he openly looks up to, earning himself the nickname the Tropical Trump. His administration’s dissemination of Trumpian electoral disinformation is in part ideologically driven. The two men see themselves as battling entrenched establishments that set out to thwart their goals, radicalising their alt-right bases by feeding them paranoid conspiracy theories.

But there is also an element of cynical calculation involved. In the latest example of how the Trump presidency has eroded democratic standards beyond US borders, the Brazilian president is also blatantly copying the Trump gameplan for undermining confidence in elections ahead of his own bid for a second term in 2022.

His target in his country’s electronic voting system. After the mob broke into the US Capitol calling for the hanging of vice-president Mike Pence over his refusal to overturn the election result, Bolsonaro said that if Brazil did not have paper ballots in place in time for 2022, “we are going to have worse problems than in the United States”.

But such dire warnings are not accompanied by any meaningful attempt by his administration to add a paper trail to the country’s highly regarded electronic voting system. Instead it appears to be little more than preparing the ground for a Trump-like assault on any future result that goes against him.

Bolsonaro has for several years been making accusations against the electronic voting system. It started back in 2018 when, copying Trump, he claimed only fraud could cost him victory in the presidential contest. Then even after he won, again like Trump, he nevertheless claimed to have been the victim of a massive fraud.

Never has he provided a shred of hard evidence to back up his allegations. Nor is there any and, one suspects, Bolsonaro does not want any random problems found as that would risk measures being taken to demonstrate a totally reliable ballot. Instead, as an authoritarian, what Bolsonaro clearly wants to do is undermine confidence in the democratic process in case he has to move against it later.

He openly talks about arming the population so “the people” can defy the country’s other institutions in defence of their “liberty”. One of the few issues his administration has worked hard on and with significant success is to make cheaper guns more accessible in Brazil.

His team has also funnelled public funds to irrigate the online fake-news ecosystem that promotes his attacks on Congress and the supreme court, which ultimately oversees elections in Brazil.

That this sort of planning could result in a copycat attempt of Trump’s utterly inept, failed but nevertheless seditious and deadly “autogolpe” – or self-coup – by Bolsonaro and his supporters is highly likely. After all, it was only a few months ago that he first flirted with carrying one out just as his administration looked about to be engulfed by his early mishandling of the pandemic, and the fallout from blatant attempts to interfere in ongoing investigations into his family’s corruption.

Then he was walked back from the brink. But he was not held to account for his unconstitutional behaviour. Just as Trump was left free to plot against an election result because of the failures to hold him to account for his previous abuses in office, so Bolsonaro is still in a position to try another authoritarian heave against Brazil’s democratic order from the very centre of power. And he is clearly laying the groundwork to do so, should needs must.

The open question is whether Brazil’s democratic institutions, far younger and less entrenched than their US peers, would hold a second time.