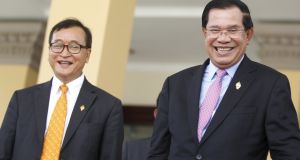 Wanted Cambodian opposition leader Sam Rainsy delayed his return home from South Korea as tension mounts between his supporters and those of prime minister Hun Sen.

The southeast Asian nation is still three years away from a general election, but acrimony between the two as they jockey for position is threatening to plunge the country back into political conflict.

A Cambodian court on Friday issued an arrest warrant related to an old defamation case for which Mr Rainsy had already received a royal pardon. The opposition party denounced the warrant as politically motivated.

Parliament stripped Mr Rainsy of the immunity that comes with his position in parliament yesterday. He had been due to arrive in Phnom Penh from South Korea yesterday and would be arrested on arrival, said government spokesman Phay Siphan.

“There won’t be any political compromise because he has lost all political status,” he said.

But Mr Rainsy said on Facebook that he had delayed his journey after talking to colleagues in Cambodia and a “number of international pro-democracy organisations” which suggested he arrive in daylight.

They also said he should “leave some time for diplomatic intervention to materialise with the objective of reaching a peaceful solution to the recent escalation of violence in Cambodia”. He would fly to Cambodia “in the next few days”, he said.

The warrant for his arrest was issued a day after Hun Sen, who has been in power for more than 30 years, threatened a lawsuit against Mr Rainsy for comments made about the election.

Mr Rainsy called on the international community to ensure that Hun Sen sticks to the election timetable and not use the deteriorating political situation to delay the vote.

Hun Sen has warned that an election victory for the opposition in 2018 would see a return to civil war.

Mr Rainsy’s Cambodia National Rescue Party ended a year-long parliamentary boycott after a deal in July 2014 with Hun Sen’s long-ruling Cambodian People’s Party that granted a series of concessions to the opposition party.

The deal fell apart after a year, when opposition party lawmakers were jailed for insurrection for their role in a protest. – (Reuters)

1 Full line up of junior ministers unveiled as Taoiseach accused by one TD of snub
2 Bobby Storey: The IRA's planner and enforcer who stayed in the shadows
3 Covid-19: Tourism chief to urge quick reopening of Ireland to overseas visitors
4 Who are the new junior ministers? All their profiles are here
5 World, look away now – these are dark days for the United States
Real news has value SUBSCRIBE