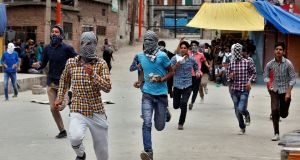 Protesters run as they prepare to hurl stones towards the Indian police during a protest after Friday prayers, in Srinagar. Photograph: Danish Ismail/Reuters

The upcoming months are critical to the future of India’s insurgency-ridden northern disputed Jammu and Kashmir state, where the impetus for azadi, or freedom, has recently undergone fierce resurgence.

Senior security officials in Kashmir’s summer capital Srinagar warned that educated and affluent youths armed with rocks, had joined the 28-year old Islamist insurgency that has claimed more than 70,000 lives.

Schoolgirls regularly join bands of young men to hurl rocks at the security forces in Srinagar and smaller towns and villages across the Kashmir Valley.

Locals talk proudly of an 11-year-old boy who charged an army encampment in the restive Sopore region, 30 miles north of Srinagar last week, baring his chest and challenging soldiers to shoot him dead.

“The level of civil disobedience across Kashmir is near complete” said a senior security official, who asked not to be identified. It’s going to be difficult, if not impossible for the government to unravel this state of affairs to bring about peace, he warned.

Many Kashmiris today believe that the BJP is opposed to them on religious, ethnic and cultural grounds, favouring instead the countrywide imposition of Hindutva or Hindu hegemony, in the service of which it has notched up impressive electoral successes in recent provincial polls.

Hindus comprise about 80 per cent of India’s population of 1.30 billion; some 15 per cent, totalling about 200 million, are Muslim.

“There is a definite move by the BJP to dilute Kashmiri identity and now a majority of Kashmiris are done with India, ” said human rights activist Khurram Parvez of the Jammu Kashmir Coalition of Civil Liberty. He claimed that the BJP’s “sustained brutalisation” had hardened postures and made ordinary Kashmiris accept violence as a means of resistance.

After a 15-year gap the army has reintroduced “area search operations” as a feature of its counter-insurgency strategy operations across Kashmir, especially in five highly volatile southern districts, further fuelling local resentments.

These operations followed the murder and kidnap by Kashmiri militants earlier this month of a newly commissioned Kashmiri subaltern, who had returned home on leave.

Since the Kashmiri insurgency erupted in 1989, India has blamed Pakistan – which controls a third of Kashmir and lays claim to the rest – for fuelling the unrest.

Islamabad denies this, claiming it has provided the Kashmir freedom struggle only moral, diplomatic and political support.

The standoff between India and Pakistan over Kashmir has led to the disputed state being dubbed a “nuclear flashpoint” between the rival neighbours.

The rivals have fought two of their three wars over the state and also engaged in an 11-week long military skirmish on Kashmir’s icy slopes in the Kargil region in 1999, in which 1,200 soldiers from the two sides died.

Some senior officials say the authorities continue to treat the insurgency inadequately as a law and order problem. However, with more than 500,000 security personnel including the army, deployed across Kashmir it is highly unlikely that India will, for now, lose any Kashmiri territory and that it will prevail in the ongoing attrition battle.

But emotionally and psychologically, it seems, little remains to be salvaged.