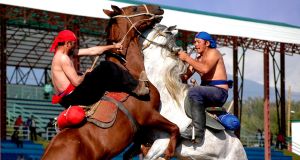 Horse wrestling: a traditional nomad existence gave the Kyrgyz the horseback prowess associated with the most famous central Asian, Ghengis Khan. Today the national sport of Kyrgyzstan is wrestling and a gory form of polo involving a sheep’s headless carcass. Photograph: Jonathan Korowicz

The market in Bishkek is a mayhem of spices, meat and dowdy attire. You want a lock, glue or fresh pistachios? Some “atum” ground chilli or perhaps a traditional upright kalpak, the Kyrgyz tall felt hat?

Hucksters hawk their wares: in the light of low-end commerce, you get a glimpse of Kyrgyzstan’s location on the ancient Silk Road that linked the Far East with the West and its place on a primitive pipeline for goods and ideas.

The uneven streets around the massive market are fogged in the smoke of shashlik stands as leathery fingers deftly turn the skewered meat on glowing charcoal grills. The fact that Bishkek’s market is named after the country’s second city, Osh, adds to the sense of dislocation. You are in an uncertain Central Asian elsewhere, bound in by Kazakhstan, Uzbekistan, Tajikistan and Muslim China.

Trees line every street in the grid-structured capital. White water gushes down through roadside trenches as glacial runoff from the snow-capped mountains that enclose this city of 800,000 people in a country of 5.5 million.

Most people you see are ethnic Kyrgyz – at 70 per cent of the populace, they trace their roots back to great-great- grandparents who were nomads.

This traditional nomad existence gave them the horseback prowess associated with the most famous central Asian – Ghengis Khan. Khan was a ruthless military leader who created and ruled the Mongol empire with an army of equestrian experts whose competitive advantage was the accuracy of their archery. Today the national sport of Kyrgyzstan is wrestling (often on horseback) and a gory form of polo involving a sheep’s headless carcass.

The dominant faith is Islam. But it is rare to see a veiled woman, and few people pray five times a day. There are mosques in Bishkek and throughout the country – some of the more obviously modern structures are financed by the Middle East.

When the religion was introduced in the 1820s, it had to convince a people whose nomadism already deified the stars, the moon, the sky, sun and trees. Elements of shamanism survived as the Kyrgyz adopted the Muslim belief.

Later, under the Soviets, energy, communications and transport were developed. The technology of irrigation was imparted, roads built, power plants fired up. A more banal influence is evident if you look at any lamppost: they all stand proud of the ground, lashed to crude cement stilts – the Russians learned this prevents wood rotting as winter snows bite at weakened bases. Another Russian idea was that everybody had to work and each person was pushed to their educational potential. Statues of Lenin remain today, explicit markers of the Russian past. When the Soviet Union collapsed in the early 1990s, Kyrgyzstan’s budget was slashed by 75 per cent. The transition to democracy was uneasy and revolutions would follow in 2005 and 2010. The nation’s red flag has 40 flickering flames drawn around the roof vent of a nomad yurt dwelling.

The streets are often missing manhole covers. There are crumbling kerbs and other public space erosions – cracked paving stones and chipped corners on the imposing oblong Soviet-era buildings.

An almost-familiar KFC sign tempts with the surprising offer of “Kyrgyz Fried Chicken”.

Located in a stunning former Soviet puppet theatre, the Metro Bar has seen busier days. Its huge overhead air conditioning propellers have ground to a halt and have had to be replaced with freestanding Chinese units. These blow a cool draft through a bar once thronging with off-duty American soldiers.

Within weeks of the 9/11 attacks, the Bush administration had negotiated use of a nearby airbase to permit military access to Afghanistan just south of Kyrgyzstan’s neighbouring Tajikistan.

Bishkek bars such as Metro benefited and experienced a boom until the US closed the base in March of 2014 and pulled out.

But in this East/West interzone, behind Osh market more meat chunks are impaled on skewers for the next shashlik serving; more trucks drive to and from the Chinese border; and more ice melts on the frozen mountain top and runs off down through the city below.